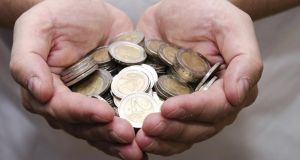 Few dispute that those stuck on low wages are struggling to make ends meet. But there are sharp differences of opinion over who is responsible for improving workers’ living standards.

Many employers and business groups see the campaign for a living wage as naive, potentially reckless and counter-productive.

The Irish Society for Small and Medium-sized Enterprises (ISME) insists any wage increases will make Irish businesses less competitive and threaten job creation at a time when the economy is beginning to recover.

The minimum wage in Ireland, he says, is already generous by European standards. Any further hikes in pay will simply make Ireland even more uncompetitive for hard-pressed businesses.

“The minimum wage is €8.65. But it’s really €9.68, when you take into account employers’ PRSI contributions,” says Fielding.

But campaigners in favour of either improving the minimum argue that modest increases are not only affordable, but could lift thousands of low paid workers out of poverty and boost the economy with extra spending power.

The Nevin Economic Research Institute - linked to the trade union movement - accepts that our minimm wage is relatively generous by European standards , even when factoring in the cost of living.

But it points out there is a problem with low pay given the sheer numbers earning below the “living wage”, a sum above the minimum wage considered essential by campaigners to be an acceptable and basic standard of living.

Eurostat figures show Ireland has a greater proportion of low paid workers than other countries. Overall, more than one in five workers were classified as low paid - earning less than two thirds of average hourly incomes - in a 2010 study.

The Insitute also points out that the size of the wage isn’t everything; it says the overall cost of labour is what matters to employers .

“When you look at these costs in the context of the EU-15, we’re significantly below the average,” says the institute’s director, Tom Healy.

Companies which can’t afford to pay higher wages shouldn’t have to, says Healy. But many employers in this sector who have very healthy profit margins could easily afford to pay a living wage.

“We’re outsourcing social policy to Government, whereas in many European countries the employer is regarded as having a duty to pay a just wage,” Healy says.

So, who’s right? Does raising the minimum wage kill job creation? Or does it create a more committed - and productive - workforce?

It’s difficult to say definitively due to the number of partisan studies commissioned by both sides of the debate.

But the most robust and carefully conducted studies tend to show little if any decrease in employment as a result of raising the minimum wage. While some show no drop in employment, others show a small and narrowly focused decrease concentrated in industries that are predominantly low-wage, such as the fast-food sector.

Similarly, studies regarding companies that have opted to pay a living wage to staff show no convincing evidence of any drop in employment. Instead, most employers found that paying a living wage enhanced the quality of the work of their staff, while absenteeism rates fell dramatically.

Amid the heat of the argument over these issues, both sides agree on a key detail: the State is heavily subsidising more and more low paid work.

This year the Department of Social Protection is due to spend close to €300 million on the Family Income Supplement, an in-work benefit for low income, working families.

It will be paid to almost 50,000 families - in respect of more than 100,000 children. The cost of this payment has soared by about 30 per cent over the past three years alone.

Improving low incomes may well form a battlefield in a larger political fight between Fine Gael and Labour over the government’s role in the economy, over raw versus regulated capitalism and the power of business versus public need.

Labour has pledged to establish a commission on low pay later this year, which will advise the Government on minimum pay levels.

A similar commission in the UK recently awarded a 3 per cent increase in the minimum wage there.

The party has also signalled it will legislate to re-establish the kind of industry-wide wage agreements which were deemed unconstitutional by the courts in recent years.

“Work should always pay,” the Tánaiste and Minister for Social Protection Joan Burton said, in an interview for this series. “The critical issue - especially for families - is that there is a sufficiency of hours and income that allows people to be financially independent.”

Fine Gael ministers, on the other hand, have ruled out wage increases or anything it feels could threaten the recovery .

“I don’t believe the priority now is for wages increases. The priority is to continue to focus on employment opportunities,” Minister for Jobs Richard Bruton said last month.

Instead, the party has trained its sights on cutting the tax burden for middle income earners, or those paying the top rate of income tax

Every euro earned above €32,800 is currently hit with the marginal tax rate of 52 per cent - when other taxes like the universal social charge and PRSI are factored in.

“Employment is our top priority, we need to hit our budgetary targets but we need to see people who have made an awful lot of sacrifices, particularly ordinary, middle income earners see the benefit of that,” he said. “I think those priorities will inform this budget.”

It’s an approach which will meet with little support among campaigners for a living wage.

They argue that a reduction in the top rate will do nothing for the “working poor” who now account for one in six people in poverty. Any pay-back should be targeted at those who have suffered the most, such as those who lost their jobs, or who are on vastly reduce wages.