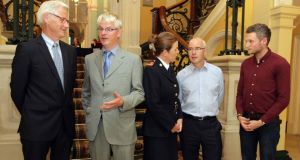 The introduction of a minimum price for alcohol is the most effective way to reduce heavy drinking among young people, a public meeting organised by the Royal College of Physicians heard last night.

Dr Stephen Stewart, director of the centre for liver disease at Dublin’s Mater hospital, told the meeting that alcohol consumption in Ireland has doubled since the mid-1960s.

During much the same period there has been a dramatic rise in alcohol-related health problems such as cirrhosis of the liver, he said.

In stark contrast, he said, most European counties recorded a drop in alcohol consumption and related health problems over recent decades.

Recent studies in Canada have shown that introducing a minimum price per unit of alcohol is a highly effective way of decreasing alcohol consumption.

In Saskatchewan province in Canada, a 10 per cent increase in price was associated with an 8.4 per cent decrease in total alcohol consumption.

British Columbia recorded a 32 per cent reduction in alcohol-related deaths one year after minimum price increases came into effect.

“Alcohol consumption is very price-dependent,” Dr Stewart said. “This would [lead to] a dramatic reduction if it was introduced here.”

In addition, he said research has shown that introducing measures to reduce the availability of alcohol and phasing out the sponsorship of sport by drinks firms would also have a significant impact on alcohol consumption.

“We get so much positive imagery around alcohol,” he said.

“In my job as a liver specialist, I am everyday exposed to negative imagery around alcohol.”

He said that patients who have been drinking alcohol for long periods of time turned a healthy liver into a “scarred, ineffective, shrunken walnut”.

“This is as far as you can possibly get from the image of a healthy, athletic rugby player.”

He told the meeting that heavy alcohol consumption among young people was associated with higher episodes or depressive symptoms and and anxiety.

“During adolescence, we pick up our strategies to deal with the slings and arrows of life. Most of us do so and manage okay,” he said.

“I worry greatly about young people using alcohol as a solution – it just blanks out the problem in the short-term.”

He also pointed to research which indicates that alcohol is a major factor in both self-harm and suicide among young people.

In one study of deaths by suicide in the northeast of Ireland, some 58 per cent of people who took their own lives were drinking beforehand.

Supt Collette Quinn, director of the Garda’s juvenile diversion programme, said about 50 per cent of crimes involving minors involve alcohol in some form.

She said the number of such offences has fallen significantly, but that binge drinking remained a serious problem which needed to be tackled.