Methadone maintenance: ‘I’d love to get this out of my system’

More than 10,000 receive the heroin substitute, but an alternative medication is available 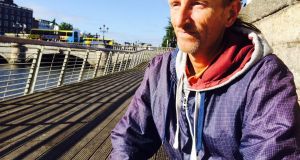 Philip (43) has been in recovery and using methadone for the past 15 years. He says he would welcome any alternative which could help his rehabilitation. Photograph: The Irish Times

The first thing Philip (43) does each morning after waking up is to reach for a plastic bottle with green liquid.

“It’s sweet, a bit like cough medicine,” he says. “I take it to feel normal. If I didn’t take this, it would be horrible ... You get withdrawals. It’s horrible. The body just shuts down.”

He takes a 90ml dose of methadone, seven mornings a week. Philip is trusted enough to get “take aways” from his pharmacy twice a week, instead of queuing up at a drugs clinic.

It doesn’t make him high, he says. The people you see spaced-out, wandering across the traffic? They’re the ones, he says, taking it with booze or benzodiazepines.

It’s 15 years since he was first prescribed a maintenance dose of methadone to help treat his addiction to heroin. He never thought, more than decade and a half later, he’d still be on the drug.

“I’m almost 44 and my body isn’t getting any healthier. I’d love to get it all out of my system, but it could take months. I’d love to just move on, get a job. I haven’t worked for years.”

Philip is one of more than 10,000 people provided with methadone by the State.

It stabilises, and sometimes even saves, the lives of heroin users. People on methadone are less likely to use illegal drugs and less likely be involved in stealing to feed a drugs habit. Many hold down jobs or training courses.

The problem is many don’t move on from the drug, which is highly addictive.

By the HSE’s own estimate, more than 3,300 – or more than one-in-three – are in the second decade of taking the drug.

It’s relatively cheap, but there is a lucrative and illegal street market for the drug. A single bottle can sell for between €70 and €100, according to users.

Health authorities are exploring the possibility of making an alternative widely available: Suboxone.

It’s typically taken as a tablet, taken under the tongue, and used as a treatment for people addicted to opioid drugs such as heroin or codeine.

It contains two active ingredients – buprenorphine and naloxone – which reduce symptoms of dependency and guard against overdose through misuse.

There is one major obstacle: the drug is expensive. The cost per patient is in the region of eight times that of methadone. In the US, where it’s been available for many years, it’s nick-named the “rich man’s methadone”.

While the drug is more expensive, she said the wider cost of methadone – such as long-term treatment and social problems –policy-makers need to look beyond the upfront cost of the medication.

“Methadone is the only option offered to treat opioid addiction at the moment. It’s one-size-fits all … I don’t think people would accept a situation in, say, heart disease where just one drugs was available,” say Dr Delargy.

In particular, she says young people who have never been on heroin who are trying to detox could be suitable candidates for the drug. In addition, patients treated for codeine and methadone users who have stabilised their lives are likely to benefit.

Tony Geoghegan of the Merchant’s Quay, a homeless and drugs service, agrees. He says that while methadone helped save and stabilise lives, the numbers moving beyond it are disappointing. This is due partly to the fact that not enough resources are going into supporting people to move beyond the drug.

Suboxone has been used on a pilot basis in Ireland among a select number of GPs. Suboxone has been available under pilot projects and other small-scale programmes. Last year, for example, 118 patients received it.

Anna, a former heroin user, is one of those who took part in a pilot project. By her own description she was from a middle-class background and drifted into using the drug at parties in her early 20s.

“It wasn’t long before I was dependant on it,” she says. “My life went from bad to worse. It became the most important thing in my life.”

She tried to get clean though methadone clinics and cold turkey, but only for short periods of time. In 2009 she took part in a pilot scheme using Suboxone. It killed the cravings, she says, and helped get her life back on track.

“It was working, so I was able to work on my issues and behaviours that led to me taking drugs in the first place,” she says. She’s now drug free, in her third year of college and is no longer takes the Suboxone.

Dr Delargy is careful to say Suboxone is not a wonder drug or the answer to Ireland’s heroin and methadone problem.

But she says is it a valuable alternative which is the preferred treatment option for some categories of patient.

Under plans being drawn up by the HSE, Suboxone could be made available, on a limited basis, as alternative to methadone – subject to funding being made available.

For Philip, he’s not sure if he would qualify for taking the drug. But, after 15 years on methadone, he’s ready to try something new. He has completed numerous Fás courses over the years and used to work as a butcher.

“I’d love to go back to the work I used to do. I worked in a butcher’s on Parnell Street and Moore Street ... The problem is that when you’re on methadone or if you’ve been associated with that scene, people judge you. I even judge people ... If there’s another chance at getting on with life, I’d take it.”