Marriage vote that shook the world 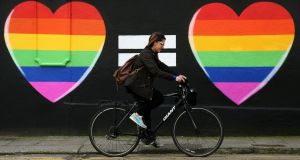 A woman cycles past a marriage equality mural in the Liberties area of Dublin, Photograph: Brian Lawless/PA Wire

There was high tension, colourful drama, a lively soundtrack, and a climactic result followed by emotional rainbow scenes of celebration. The marriage referendum has all the key ingredients of a 2015 Reeling In The Years moment.

A decade ago the notion that a majority of the Irish people would vote to allow gay and lesbian couples to marry seemed fanciful, although that didn’t stop some in the LGBT community from aspiring and organising even then to make it happen.

A year ago the polls suggested the referendum might pass easily. These, however, measured sentiment at a time when, although a referendum date had been announced, there was little public engagement. The same polls revealed that the Yes majority was soft and susceptible to disruption by No arguments.

On May 22nd, the Irish became the first people in the world to provide for same- sex marriage by popular vote. The marriage referendum was also a unique political happening for many other reasons. At 61 per cent, the turnout was unprecedented; at 62 per cent the Yes majority was emphatic. Both the campaign itself and the reaction to the result were as never seen previously in Irish politics.

Two of Ireland’s leading LGBT organisations, Glen and Marriage Equality, came together with the Irish Council for Civil Liberties and built a massive civic political machine. They liaised usefully with a cross-section of political parties and groupings and exploited new generation technologies to enhance old-style campaigning. They marshalled, supplied and supported the spontaneous effort of an army of volunteer canvassers nationwide.

The No side fielded able and impressive advocates, making religious arguments for the preservation of marriage as a heterosexual tradition, or voicing apprehensions about societal implications. They were ably matched, however, by voices on the Yes side, none more so than the careful, comprehensively argued interventions of former president Mary McAleese.

They also created a calm space where those for whom the result mattered most could share their personal and family stories.

High-profile politicians and media figures felt enabled, even compelled, to speak publicly of their sexual orientation for the first time. Hundreds of individual accounts of growing up gay in Ireland were shared with families, posted on social networks, or communicated at doorsteps in the cause of marriage equality.

If the referendum marked the political coming out of a love that once had dared not speak its name, it also marked the political expression of another love talked about too seldom in Ireland – parental love. Mothers demanded the same equality for all of their children, gay or straight. Fathers, with refreshing frankness, spoke of how the revelation that their son or daughter was gay had changed their minds, but not altered the strength of their love for their children.

Like previous referenda on social issues, the marriage referendum gave rise to noisy debate across the broadcast and print media, much of it taken up with issues not on the ballot paper.

Online effort, once seen as a distraction from mainstream political activity, became a recruitment and deployment tool for offline activism and ultimately a driver of mobilisation to the polls. Social media also generated and documented the poignant phenomenon that was #hometovote, an international odyssey that saw thousands of Ireland’s recent emigrants return home to cast their ballot.

This was a people’s referendum like no other and above all else it was a young people’s referendum. The younger generations, who it had wrongly been presumed were uninterested in politics, were highly engaged on this issue, with an intensity that suggested their detachment was not from politics itself but from the inter-party and inter-personality competition that usually dominates in our system.

Many of them canvassed passionately, posted incessantly and cajoled their elders to the polls and thereby shaped the final outcome.

When the ballot boxes were opened on that sunny Saturday, May 23th, weeks, months, and for some years, of pent-up emotion burst forth. Never had count centres seen so many tears and these from the winning side.

Most felt happy that our small country, slowly emerging from dour and distressing times, could do something so positive for so many at home or abroad