New Bill on children’s issues will allow focus of campaign to be on inclusion, Fitzgerald says 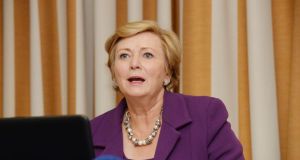 Minister for Justice Frances Fitzgerald has said that new legislation to be published shortly on children’s issues will ensure people can focus solely on the issue of marriage equality when they vote in the referendum in May. Photograph: Alan Betson/The Irish Times.

New legislation to be published shortly on children’s issues will ensure people can focus solely on the issue of marriage equality when they vote in the referendum in May, Minister for Justice Frances Fitzgerald has said.

In a strong speech calling on people to support the referendum proposal, she said it was not about parental rights for children. That issue would be addressed in the Children and Family Relationships Bill which she will publish shortly.

The Bill will deal with long outstanding family law and children issues in relation to parentage, including parentage in assisted reproduction, guardianship, custody, adoption, access and maintenance, she said.

“Enacting the Child and Family Relationship legislation in the coming month will mean the only question in the minds of the people, when they vote on the referendum question, should be about marriage equality and not about children, parents, custody, adoption or the rest of it.”

Addressing the meeting, hosted by Fine Gael LGBT, Ms Fitzgerald said the referendum offered Ireland the opportunity to show it was a truly inclusive and pluralist society.

“The amendment will give a clear right to same-sex couples to marry on the same basis as other couples. It will not affect in any way existing marriages,” said Ms Fitzgerald, adding that it would not affect the way opposite-sex marriages were performed or registered. The clergy would have the right, exercising their existing religious freedoms, to decline to marry specific couples, said Ms Fitzgerald.

“They should not be demonised or caricatured because of their beliefs. If this referendum is about inclusion, then we must remind ourselves, every day during the campaign, that inclusion starts with respect for those with whom we passionately disagree.”

Ms Fitzgerald said she did not believe there was a person in Ireland who did not have a son or daughter, a niece or nephew, a colleague or friend who was not excluded from being able to enjoy marriage because of the current constitutional position.

Ms Fitzgerald said that perhaps once in their lifetime, a generation of Irish people got a chance to make a choice which defined the nation.

Union of Students in Ireland president Laura Harmon told the meeting young people were overwhelmingly in favour of marriage equality.

She urged the Government to hold the referendum on a Friday so as to maximise the turnout among students and young voters.

The meeting, which was open to the public and held in the Gresham Metropole Hotel in Cork’s city centre , attracted a crowd of about 200 people with the majority of the attendance being young men and young women in their 20s and early 30s.

According to one member of Fine Gael, the audience included some 30 or so members of the party mainly drawn from Cork city and included both older and younger members as well as elected representatives and local party office holders.