Macho attitudes are no match for the Micra economy 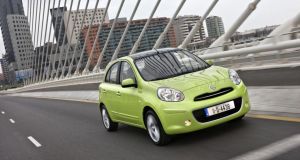 “The Nissan Micra, and its drivers, are a little despised in the macho Irish traffic system. If you are driving a Micra it is not unusual to be bullied on the road, even by women bus-drivers.”

The Nissan Micra is one of the official sponsors of today’s Women’s Mini Marathon. It is fair to say that, on the whole, this is a rare sortie into the headlines for the Micra. It has no presence in Formula One. James Bond has never driven one. The lads in Top Gear leave it alone.

However the Micra has made the news twice in a fortnight, because worldwide almost a million cars – 841,000 – have been recalled for safety reasons. On a routine quality check, it was found that a nut in the steering system could come loose over time. The Nissan people are eager to point out that no steering wheels have actually become detached. But in England a lady called Elizabeth Abdullah (56) reported that she had lost control of her 2005 Micra in Nottingham, when the steering wheel came off in her hands.

“I thought I was going to die,” Ms Abdullah told the Daily Telegraph. “But I just hit the brakes.”


Dignified and cautious
Crucially – and this is typical of Micra drivers – Elizabeth Abdullah was doing a speed of 30mph at the time. Micra drivers are a dignified, cautious and respectable bunch – the backbone of motoring. John Betjeman would have written an admiring poem about us, if only he’d lived long enough. Because the Micra is the Hillman of its day.

For Nissan drivers to find themselves in the middle of a product recall is a bit of a shock – like discovering your Auntie Mary used to be a go-go dancer. Or that your bank manager has given you an unpleasant disease in shaming circumstances. (Micra drivers cling to rather old-
fashioned ideas about banks.)

Now about 14,000 of us, the drivers of Micras manufactured between December 2002 and May 2006, are awaiting letters from Nissan, calling us back to the dealers for tweaking. The chassis list is expected to arrive at Nissan headquarters next week, and will then be sent to the Department of the Environment so that names and addresses can be obtained through the road tax system. This is just as well for those of us whose Nissan dealers have gone bust. But all in all, for a group that is entirely risk-averse, it is a bit unsettling. Even though the recall is just a precaution and the Nissan people have assured us that the tweaking will take only 15 minutes.

But the recall shines a light on one of the heroic products of our times, which is uncelebrated simply because most of the time, it simply works too well. The Micra is what used to be called – and may still be behind closed doors – a woman’s car. That is, it is low-key, safe and extraordinarily efficient. However it can do 100mph on the Belfast road with very little bother. Apparently.

During the boom there was a lot of talk about Ireland’s escalating Mercedes-Benz habit, which was considerable. Meanwhile, there are about 100,000 Micras on the roads, sold since 1983.

So, as the Mercedes-Benz crunched over the gravel on the driveways of many a newly acquired mansion, the Nissan Micra was going to the supermarket on the way home from work.

It was bringing the dog to the vet. It was ferrying garden furniture from B&Q. It was taking very large, cheap pictures back to Ikea (the guy on the Ikea customer services desk couldn’t believe the pictures,which measured139cm by 99cm, had been carried in such a small car).

In crude consumerist terms it appears that the Nissan Micra has had a glamour bypass. But the strange thing is that it is used in large numbers by the old and the young. The Micra looks like a Volkswagen Beetle that has spent too long in the tropics. It’s a slightly etiolated version of the VW. It’s high, with big windows.

These features, combined with unbeatable steering, make it an ideal car for older people as you don’t have to swivel your neck to park it. And they also make it a great car in which to learn to drive as the Nissan is pretty forgiving as well as nippy.

Bullied on the road
The downside of all of this democracy and irreproachable efficiency is that the Nissan Micra, and its drivers, are a little despised in the macho Irish traffic system. If you are driving a Micra it is not unusual to be bullied on the road, even by women bus-drivers. (Madam, you didn’t even indicate as you cut into my lane) .

Also, in my experience, straight men between the ages of 35 and 60 years of age are initially reluctant to be seen driving a Micra. Although they are soon persuaded by its quiet charm, and then subsequently become involved in road rage incidents as ill-advised drivers of bigger cars try to boss them round. There have been some interesting encounters.

The Dublin Women’s Mini Marathon could not have a finer mascot. It is a little strange that the race, which immobilises traffic all over the city for hours on end, should be partially sponsored by a car. But it is a great day, and we wish everyone the best of luck with it.

Truth to tell, the Nissan Micra deserves its place in the sun.