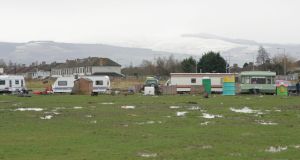 Travellers are described as “one of the most marginalised and excluded...groups in Irish society”. Photograph: Alan Betson

The State’s failure to vindicate the rights of a range of groups, including older people, children, Travellers, women, the homeless and migrants, is highlighted in a report to the United Nations.

The Your Rights, Right Now report, published by the Irish Council for Civil Liberties, is being submitted to the UN’s Universal Periodic Review (UPR) working group in advance of Ireland’s appearance before the Human Rights Council in Geneva in May.

It is endorsed by 52 human rights NGOs, and makes 87 recommendations.

Ireland’s appearance under the UPR process will be the first since 2011. As such it would represent an “audit” of progress on a range of human rights issues under the current Government, said Mark Kelly, executive director of the ICCL.

Since the last review, Ireland has still not ratified seven key international human rights instruments, including the UN Convention on the Rights of People with Disabilities (UNCRPD), the Optional Protocol to the Convention against Torture and Other Cruel, Inhuman or Degrading Treatment, and, the Optional Protocol to the International Covenant on Economic, Social and Cultural Rights. The report calls for ratification of these.

On the historical abuse of women and children in care, it calls on Ireland to “implement full and independent inquiries into the practice of symphysiotomy and into the treatment of women in the Magdalene laundries leading, where wrongdoing is identified, to prosecutions”.

In education, it calls for all “publicly funded schools” to be obliged to deliver education, employment, enrolment and the State curriculum in “an objective and pluralistic manner”.

Describing Travellers as “one of the most marginalised and excluded...groups in Irish society” it calls for them to be “as an ethnic minority...without further delay”

It says the State must “set a concrete timeline for UNCRPD ratification,” and introduce legislation to officially recognise Irish Sign Language.

Since Ireland’s last appearance under the UPR process, a housing crisis has emerged. The report calls on the State to “prioritise the family homelessness crisis”, fast-track the provision of social housing, provide free legal aid to people facing eviction from social housing and ensure rent supplement meets market rents.

It says: “Ireland continues to have one of the most restrictive regimes in the world in relation to accessing safe and legal abortion services for women and girls”. It calls for repeal of Article 40.3.3 of the Constitution which guarantees to vindicate the equal right to life of the mother and unborn as far as practicable. It also calls for repeal of sections 22 and 23 of the Protection of Life During Pregnancy Act 2013 which criminalises abortion.

A “significant number of challenges remain which adversely affect the quality of life of children” including timely access to services, inadequate child protection and inadequate access to childcare services.