Letter said Brendan Behan ‘not amenable to any law or order’

Supervisor appealed for his dismissal from painting job 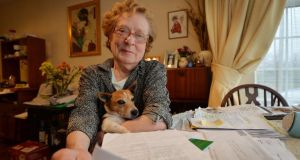 Patricia Ferguson, with a 1950 complaint letter which criticised Brendan Behan as he was a painter with the Irish Lights, though she found the writer to be ‘a pleasant sort of fellow’. Photograph: Alan Betson / The Irish Times


Brendan Behan’s language was “filthy” and he was “not amenable to any law or order”, according to a letter from a lighthouse keeper in 1950 to the Irish Lights head office in Dublin

He was “the worst specimen I have met in 30 years service” wrote D Blakely, principal keeper, who urged “his dismissal from the job now before good material is rendered useless and the place ruined”in the letter that emerged this week.

Mr Blakely was writing from St John’s Point lighthouse in Co Down to the Irish Lights head office in Dublin. Brendan Behan (then 27) was, it appears, employed to do a painting job at the lighthouse and made an impression. Referred to in Mr Blakely’s letter as “the painter B Behan”, he had been “absent from his work all day yesterday and not returning to station until 1.25am this morning (sic)”.

Behan’s attitude was one of “careless indifference and no respect for Commissioners’ property or stores”. He was “wilfully wasting materials, opening drums and paint tins by blows from a heavy hammer”. His language was “filthy and he is not amenable to any law or order”. He mixed “putty, paint, etc. with his bare hands and wipes off nothing” and had turned the place “into a filthy shambles inside a week”, leaving it “in a scandalous condition of dirt”.

These are extracts from a letter sent to The Irish Times last week following a report in the newspaper about the launch of a new stamp to commemorate the writer. The sender was Patricia Ferguson (83), nee Peat, of onetime electrical retailer Peat’s.

Now in Glasnevin, she had lived over the shop on Parnell St into the late 1950s. When she lived there, she would occasionally see Behan “going down to the fruit market around 7am, which had a special early morning licence”.

He would say hello to her as he passed the shop. He was “a pleasant sort of fellow,” she said. She said “the letter was given to me over 20 years ago by a friend of my nephew Ken who worked in Irish Lights”. She felt “it should give you a chuckle and some some home truths”.

In 1950, Behan was between paramilitary and literary careers. By 1950 he was no longer in the IRA. He had returned to Ireland in 1941 after serving a sentence for attempting to blow up Liverpool docks in 1939. In 1942 he was tried in Ireland for the attempted murder of two detective gardaí. Sentenced to 14 years, he was jailed in Mountjoy and the Curragh Camp.

In 1946 he was released under a general amnesty for IRA prisoners and internees and, aside from a short prison sentence in 1947 for his part in trying to break a fellow IRA member out of a Manchester jail, his paramilitary career was over by the age of 23.

Sometime after this failed Irish Lights painting job, he left for Paris where he began to write in earnest, from 7am to noon, when the pubs opened.

His first play The Quare Fellow was staged in 1954.