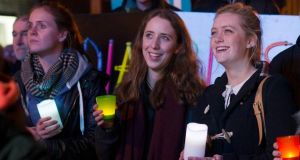 Several hundred people have attended a rally in Dublin to “challenge and highlight media bias” on matters relating to abortion.

The demonstration was organised by the Pro Life Campaign and took place on Molesworth Street in front of the gates of Leinster House. The road was closed to traffic during the event as attendees stretched almost as far back as Dawson Street.

Pro Life Campaign spokeswoman Wendy Grace said the event was called “33 to 1: Challenging Media Bias” because of a two-week period in which she said 33 pro-choice articles appeared in the media compared with just one anti-abortion article.

She said the event was not designed to “attack the media”, but to challenge the “extreme and blatant bias” that was “denying the public the opportunity to hear both sides”.

“It makes a real mockery of the abortion debate,” she said. “We are expected to treat this level of bias as acceptable and it is not.

“This bias has resulted in women’s stories never being told and in atrocities being covered up.

“Fair-minded journalists will look at the evidence and try to rectify this situation. We have to now insist there is balance on this issue,” Ms Grace said.