Journalist’s funeral told of a life ‘lived to the full’

His ‘gifts as writer, musician and singer, husband, father and grandfather’ recalled 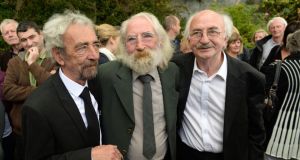 Mickey, Cormac and Cathal Mac Connell at the funeral of their brother, Seán Mac Connell, at the Church of the Divine Word, Rathfarnham. Photograph: Frank Miller

His death earlier in the week at the age of 66, had been “sudden”and “devastating”, his son Eoghan said. “Dad had so much life in him. . . no one expected this event.” Support for the family in recent days was “a great comfort”, he said.

In his homily, Fr Jim Mulherin OSM said that “although we know that Seán is already safely home with the Lord, we who remain still struggle to find meaning in what has happened – and happened so unexpectedly”.

Readings were “chosen by Seán’s family to reflect his life, his love of nature and creativity”, he said. Ecclesiastes, read by former Sunday Tribune editor Noirín Hegarty, “tells us that there is a season for everything. One who knew about farming and wrote about it would best appreciate that way of seeing life.”

Though “Seán’s life was short by modern standards”, his “many gifts as writer, musician and singer, as husband, father and grandfather” meant he “lived life to the full”. The large number of people attending the funeral was “a great tribute to him”, he said.

Among the attendance were Irish Times editor Kevin O’Sullivan and former editor Conor Brady, as well as very many former colleagues from the paper, and from the Irish Press where he had also worked.

There too were Maireád Lavery and Pat O’Keeffe of the Irish Farmers Journal, and its chief executive, Matt Dempsey, as well as Ger Scully and Gearóid Keegan of the Tullamore Tribune.

A poem, Father, written by Seán himself was read at the funeral Mass in the Church of the Divine Word at Dublin’s Marley Grange.

It was recited by former Independent Newspapers journalist Eugene Hogan, who said it could have been about Seán:

When my father died

The undertaker and doctor.

Of a man with a heart of gold

Locked in a tabernacle of arthritic bones

who could melt stones....with his words.

Who loved children and dogs.

Ballads dropped from his lips

And a mercury brain generated

Quips worthy of the best.

For that he was.