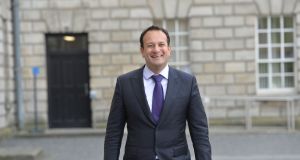 The JobBridge scheme, which provided internships for unemployed graduates, is to be replaced with a more targeted scheme, Minister for Social Protection Leo Varadkar has said.

The Minister said the scheme, introduced in 2011 by then minister for social protection Joan Burton to provide work experience to graduates, had served its purpose. He said he would introduce a new scheme more suited to the current job market.

Under JobBridge, interns work for between six and nine months, 30-40 hours per week, for an additional €52.50 on top of unemployment allowances. About a third of the 46,500 people who signed up to the scheme have gone on to secure full-time employment.

Since its inception, the scheme has attracted criticism from politicians, trade unions and other bodies, including the National Youth Council of Ireland.

In April this year, trade union Impact called for the scheme’s abolition following reports it had been used to fill hundreds of positions for State agencies and multinational corporations.

Deputy general secretary of the union Kevin Callinan said many of those who welcomed the scheme in 2011 have been troubled by the recurring reports of abuse and exploitation, “which have dogged its reputation and greatly undermined its many positive outcomes”.

“While the scheme undoubtedly served a useful purpose when youth unemployment and emigration was rocketing at the height of the economic crash, it’s now time to move on,” he said.

The most frequent user of the scheme has been the HSE, which took on 399 JobBridge interns over five years, followed by the GAA with 249 interns. Global IT firm Hewlett-Packard brought in 176 JobBridge interns.

Last week, Minister of State for Training and Skills John Halligan, also spoke against the scheme and said it should be scrapped.

Last week, the Department of Social Protection said decisions on the future of the scheme would only be made after the publication of a review, being undertaken by consultancy Indecon. The report was expected to be ready in September.

Welcoming Mr Varadkar’s announcement, Fine Gael TD for Dublin North-West Noel Rock said there was ample evidence to suggest that the abuses of the JobBridge scheme were outweighing any good that it did.

“As the economic recovery widens and deepens through all sectors, we are thankfully seeing the rate of youth unemployment fall,” he said.

“As such, the JobBridge scheme is now past its sell-by date. I welcome the speed with which Minister Varadkar has recognised this fact, and look forward to further reforms.”