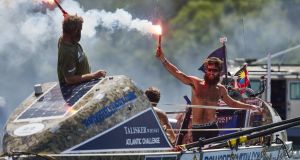 The team of four amputee military servicemen, including Paddy Gallagher (30) from Achill Island in Co Mayo, arrive at the island of Antigua after rowing more than 5,500km across the Atlantic Ocean. 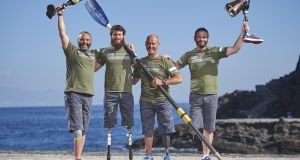 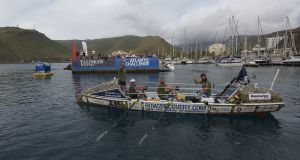 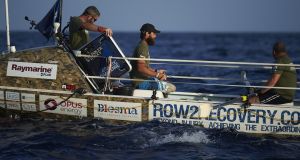 A team of four amputee military servicemen, including an Irish man from Achill Island, have arrived at the island of Antigua after rowing more than 5,500km across the Atlantic Ocean.

Paddy Gallagher (30) from Achill Island in Co Mayo joined Cayle Royce, Nigel Rogoff and Lee Spencer in the Canary Islands in December to embark on the Talisker Whiskey Atlantic Challenge.

Nearly seven weeks later, the four men have become the first all amputee team to complete the demanding transatlantic voyage.

Mr Gallagher, the son of a fisherman who grew up on Achill island in Co Mayo, moved to the UK in his 20s where he joined the Irish Guardsman. In 2009 he lost his right leg below the knee in an IED blast in Nad E Ali, Afghanistan. A keen sailor, Mr Gallagher has already sailed in the Arctic Circle since his leg injury.

Former RAF flight sergeant Nigel Rogoff lost his leg during a Royal Air Force parachuting display, while Lee Spencer, a member of the UK Royal Marines, lost a leg after being hit by flying debris as he was helping to save the life of a motorist in Surrey.

Cayle Royce, who led the team across the Atlantic, was the only double amputee to take part in the challenge. Mr Royce underwent a double amputation and lost the fingers on his left hand following an IED blast in Helmand, Afghanistan in 2012.

The team was one of 29 crews who took part in the transatlantic race. All other teams participating in the challenge were fully able-bodied.

Spokeswoman for the team Lucy Northmore said the men faced extremely tough conditions during the race and burned about 8,000 calories daily. “They won’t be able to put their prosthetic legs back on as they’ll have lost about 20 per cent of their body weight,” she said from Antigua.

The team relied on expedition food packs which are high in calories for sustenance while rowing two hours on, two hours off, for 24 hours a day.

“It’s no fun and very hard, much harder than people actually realise,” explained Ms Northmore. “It’s difficult even for the military. They have been caught in storms when they had to lock themselves into a tiny airtight cabin. With the waves and the swell they’re very vulnerable.”

The men used the race to raise funds for Help for Heroes, Blesma, Prince Harry’s Endeavour fund and Row2Recovery - all charities that provide rehabilitation to men and women injured during military service.

“For anyone who has been injured while in service you don’t have to stop your life,” said Ms Northmore. “They’re doing the race because they feel very strongly about showing there is life after injury.”

Mr Royce, who took part in the race as part of the 2013/14 Row2Recovery crew, explained before setting off in December that the key to completing the challenge is patience.