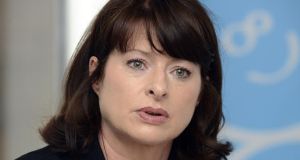 Emily Logan of the Irish Human Rights and Equality Commission has called on the Government to heed the calls of the UN Committee on Economic, Social and Cultural Rights (ESCR) and start to “phase out” austerity measures. Photograph: Dave Meehan.

The Irish Human Rights and Equality Commission has said a UN committee report published on Monday has sent the Government a “strong message”.

Chief commissioner Emily Logan called on the Government to heed the calls of the UN Committee on Economic, Social and Cultural Rights (ESCR) and start to “phase out” austerity measures.

Ms Logan was present in Geneva earlier this month when Ireland was examined by the committee on its compliance with the International Covenant on ESCR. It was Ireland’s third periodic review as a signatory to the covenant.

Ms Logan noted: “The UN committee has concluded that the State’s response to the crisis has been disproportionately focused on cuts to public expenditure, in the areas of housing, social security, health care and education.”

“The Commission looks forward to seeing the Government follow through on its commitment to social impact assessments by a cross-departmental body.”

“The committee highlights problems in the protection of rights across all the areas covered by the covenant.

“It makes strong recommendations for State action on adequate housing to protect people’s right to a secure home, right from an adequate supply of social housing through to rent controls to better regulation of banks in relation to mortgages,” said Ms Blackwell.

“It is now incumbent on the State to consider and implement the recommendations – or in the alternative, to demonstrate why it is not suitable to implement them.”

Martin Collins, co-director of the Traveller and Roma support organisation Pavee Point, welcomed the calls from the committee for Travellers’ and Roma rights to be better protected.

“How many UN committees have to point out Ireland’s embarrassing failure to protect Traveller and Roma rights before the State begins to take this issue seriously? If it is clear to a UN Committee in Geneva surely it should be clear to the Irish government,” he said.

The Irish Family Planning Association, which was also in Geneva for the hearings, said the committee’s report left “absolutely no doubt that a realistic response is needed on abortion access” in Ireland.

“It is now incumbent on the Government to respond in a considered way to what the Committee has recommended,” said the IFPA’s chief executive Niall Behan.

Colm O’Gorman, executive director of Amnesty International Ireland, said the UN had been “clear” that Irish abortion laws were “violating the human rights of women and girls”. “As Ireland gears up for a general election, all political parties should include solid commitments to holding a referendum to repeal the eighth amendment in their pre-election manifestos,” he said.

The Pro-Life campaign, however, described the hearings as “the latest chapter in an ongoing charade perpetrated by a Committee that is deeply hypocritical when it comes to abortion.”