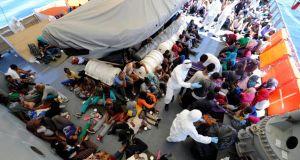 Rescued migrants on board the LÉ Eithne in the Mediterranean in June 2015. Taoiseach Enda Kenny said he was “very proud” of the crew of the Irish Navy vessel for their rescue work. Photograph: David Jones/Irish Defence Forces

Taoiseach Enda Kenny has said consideration will be given to accommodating additional migrants who have travelled to Europe.

The Government’s Syrian humanitarian admission programme offered “temporary Irish residence to vulnerable persons from Syria or who have fled Syria to surrounding countries since the outbreak of the war in Syria” with family members who reside in Ireland.

During a visit to Cork over the weekend, Mr Kenny said given our history of coffin ships, Irish people have a natural empathy and understanding of the plight of migrants.

“There are two [issues] here: relocation and resettlement. In respect of the refugees from Syria we have already taken twice what was recommended that we should take.

“In respect of the new situation, these are people who are currently in Greece and Italy.

“Because of our tradition and our understanding of this from our own history, we will consider of course taking numbers of people who are currently in Italy and Greece.

“The Minister of Justice attended at the meeting in Luxembourg yesterday and the protocol would have to be approved first of all and then we would have to get consent from the House of the Oireachtas. While we are not obliged officially to participate in this, Ireland can make a decision to opt in.”

Mr Kenny said he was “very proud” of the crew of the LÉ Eithne, which has been rescuing migrants in the Mediterranean, adding there was something “quite emotional” about ships leaving to do humanitarian search-and-rescue work.

He commended the crew for the “wonderful effort” they made to save migrants in difficulties.

“This is something that is so real to Ireland’s history. I am sure the [LÉ] Niamh and its crew will do the same thing.”

Crew from the LÉ Eithne are preparing to return to Ireland after having saved almost 3,400 migrants trying to reach Europe in less than two months of patrols in the Mediterranean. The LÉ Niamh will now replace that vessel.

The decision to send the LÉ Eithne was taken earlier this year in response to the huge numbers of migrants dying as they fled war and economic deprivation and attempted to make it to Europe.

The EU plans to resettle 44,000 of those who made the risky sea crossing. It’s estimated a further 1,850 drowned so far this year attempting to get to southern Europe.