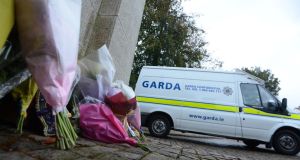 The death of two-year-old Hassan Khan, whose body was found in an apartment in south Dublin on Thursday evening, is being investigated by Tusla, the Child and Family Agency.

The investigation will examine how various agencies interacted with Hassan Khan and his family from early August, when he was the subject of a Garda Child Rescue Ireland (CRI) alert.

The child’s body was found in a top-floor apartment in the Ridge Hall complex at Shanganagh Road, Ballybrack, by gardaí after the alarm was raised by someone known to the boy, shortly after 2pm on Thursday.

The toddler had suffered stab wounds to his upper body. A woman at the apartment was arrested and gardaí initiated a murder investigation on Thursday evening.

On August 10th the boy was briefly the subject of a CRI alert when gardaí became seriously concerned for his wellbeing. The alert was stood down after a short time when he was found safe and well with his father, Mohamed Saleem Khan (61), in Ballybrack.

Following a CRI alert the procedure is that gardaí notify Tusla’s child-protection service’s duty social worker, providing what background information they have.

The case is screened by child protection services and ideally a face-to-face meeting with primary carer or carers is arranged as soon as possible.

A professional in child protection, who did not want to be named as the case may come to their attention for professional opinion, said yesterday that a social worker is always allocated to a child following a CRI alert.

“They would assess how the child is doing and assess the parent or parents’ capacity to meet the child’s care needs.

“ They would see if there were complicating factors such as a drug or alcohol issue, a mental health issue, domestic violence, an intellectual disability or any other serious stressor that might impede their ability to look after the child.”

Based on these factors, the social worker will prioritise the case and link in with a network of other agencies as necessary. This could include adult mental-health services, the public health nurse, addiction services, the school or creche, family support services, psychiatric services, the GP or extended family.

“The social worker is never the only professional involved. They act as a case-leader or key worker and others will be alerted to the fact a child’s welfare is to be monitored. The priority is that the child’s needs must be met and the best outcome is that they can be met within their own family.

“It really is a last resort that you would remove a child; first because they have a right to live with their family and, second, because removal is very disruptive for their attachment.”

If adult mental-health services are involved in treating vulnerable parents it is arguable they should be mandated to look out for possible risks to their patients’ children. This does not always happen, say those working in child protection.

“Under the Children First legislation they are obliged to report suspected cases of child abuse. But they don’t always look out for it,” said the professional. “There is a need for a more holistic approach to treating adults with mental-health issues where children are also involved.”

Commenting on the Hassan Khan case, Minister for Justice Frances Fitzgerald described it as “very, very tragic” and said her “first thoughts [were] with the young child who has lost his life and the family”.

“This is a matter that is under investigation right now so I will refrain from any comment. I’m not in a position to comment on the individual details of the case.”

Gordon Jeyes, chief executive of Tusla, also said he could not comment as a murder investigation was under way. He confirmed Tusla was working to establish the facts.

“In due course, the Child and Family Agency will work with any investigating body to provide all information available both in terms of any supports offered previously to the child and his family and any information which may cast light on why this tragic death took place.”

* This article was amended on Saturday, October 18th, 2014. It  originally stated the HSE was investigating Hassan Khan’s death.  This is incorrect. The HSE has pointed out that responsibility for such investigations lie solely with Tusla, the Child and Family Agency, which was  established on January  1st, 2014.