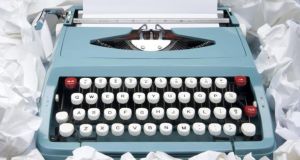 A cardinal rule for reporters is, “never assume”. Assumption can lead you into all sorts of dangerous terrain, unless you are the Virgin Mary. The Feast of her Assumption is next Friday, big day in Knock.

In the context of bad journalism it means “to take for granted” or “accept without proof”. It can also mean “to take on a responsibility”, ie to assume an obligation/role. It may mean taking on a pose, as in to assume an attitude of confidence, where it is derived from the Latin assumere, adsumere.

Where the Virgin Mary is concerned however it has a very different meaning. Assumption in this instance is believed to go back to the 14th century, meaning “the reception, uncorrupted, of the Virgin Mary into Heaven”.

The word is traceable to the Old French assumpcion believed derived from the Latin assumptionem, meaning “a taking/ receiving”. It is a noun of action from the past participle stem of the Latin assumere.

Belief in the Assumption of Mary may long have been a tradition in Catholicism but it only became a formal teaching of the church, and as an infallible dogma which all Catholics must hold, in 1950.

On November 1st that year, addressing a crowd of more than 500,000 in St Peter’s Square, Pope Pius XII solemnly defined in Munificentissimus Deus, that the “Immaculate Mother of God, the ever-virgin Mary, having completed the course of her earthly life, was assumed body and soul into heavenly glory.”

Note the “was assumed”. Mary was taken up. And there lies the difference between “assumption” and “ascension”. Christians believe Jesus ascended to heaven, ie under his own steam.

From the Latin ascensionem, it means “a rising”, from ascendere, “to ascend, go up”.

One of the main feasts of the Christian year, the feast day is said to date as far back as the later 4th century and is one of the five major milestones in the life of Jesus as recorded in the gospels, the others being baptism, transfiguration, crucifixion, and resurrection.

My discomfort brought consolation to some. And that is not an assumption. inaword@irishtimes.com