New legislation, providing for fines and creche closures, to come into force in May 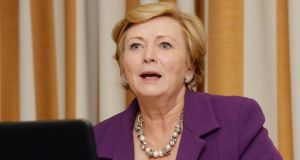 Frances Fitzgerald, Minister for Children and Youth Affairs: “The legislation gives the inspectorate new powers to be used before the stage of prosecution. We have brought in a range of pre-prosecution actions which empowers them much more.” Photograph: Alan Betson/The Irish Times


Child safety, management and staffing and record-keeping have been identified as ongoing areas of “particular concern” in pre-schools and creches, according to unpublished research commissioned by the HSE, an Oireachtas committee has been told.

Gerry McKiernan, service director with the Child and Family Agency, was addressing the Oireachtas Committee on Health and Children yesterday.

“The preliminary findings demonstrate that the majority of providers are compliant with the legislation but particular areas for improvement have been identified, notably management and staffing, safety and record-keeping.” When the research was completed, Mr McKiernan added, a seminar would be arranged in conjunction with the Department of Children to discuss the findings.

The committee, which was discussing standards in creches and Montessori schools, also heard that new legislation, providing for fines and closures, would come into force in May.

Minister for Children Frances Fitzgerald said she would also introduce new national quality standards in May for early-childcare services and crèches – to include a requirement that all staff working with children in such services have at least a full Fetac Level 5 qualification in early childhood education.

A core problem up to now had been the fact there were no creche inspectors in some parts of the State. “So in some areas, which is extraordinary when you reflect on it, there were no inspections,” Ms Fitzgerald said. “Eight posts are currently being filled to address this problem and once recruitment is finalised those eight inspectors will be in position.”

Mr McKiernan said there had been a particular problem with too few inspectors in the greater Dublin area. He said when the eight new inspectors were appointed there would be 47 inspectors, giving an approximate ratio of one inspector to every 100 facilities. He said the inspection reports would be available online on the Pobal website and retrospective reports from January 2010 to July 2013 were now being put up on the site. “The remaining historic reports will be published by the end of April 2014,” he added.

The Minister said the new legislation would also mean that before any new facility opened, it would have to register with the national inspectorate. “It is quite extraordinary that you didn’t have it before . . . Importantly the legislation gives the inspectorate new powers to be used before the stage of prosecution. We have brought in a range of pre-prosecution actions which empowers them much more. They can impose improvement orders which, if not complied with, can result in deregistration of the service.”

This put the inspectorate in a “much stronger position” that it was in a year ago, as it meant they could order a service to improve and hopefully remain open, rather than have to threaten to prosecute and probably close them down. She said fines for non-compliance had also been increased.

1 Coronavirus: Surge hits nursing homes as 24 clusters emerge
2 Ireland has strategy to ‘break the chains’ of coronavirus - WHO’s Mike Ryan
3 We need to cancel the Leaving Cert and give students predicted grades
4 Coronavirus: Situation in Ireland being ‘misrepresented’ because of limited testing
5 Coronavirus: Residents of Wuhan told to stay inside and be vigilant
Real news has value SUBSCRIBE