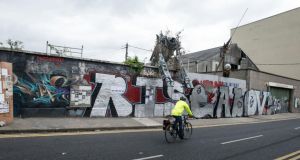 The frontage of a premises in Grangegorman in Dublin which has been the site of a squat for the last two years. The residents of the squat have said they will challenge a court order directing their arrest. Photograph: Dave Meehan/The Irish Times

Squatters at properties in Grangegorman in north Dublin are awaiting receipt of Tuesday’s High Court order directing their arrest before bringing a case to the Court of Appeal.

Last March, the High Court ordered the previously derelict properties at Lower Grangegorman and North Brunswick Street be vacated by May 4th so that Nama-appointed receiver Luke Charleton could sell them to meet an unpaid debt of €21.9 million owed by businessman Paschal Conroy.

Approximately 20 people have remained on the site following the directive.

Tuesday’s order by Mr Justice Paul Gilligan directed the arrest of those persons who remain on site so they may attend court and explain why they ought not be jailed.

The squatters informed The Irish Times that the order will be the subject of an appeal, pending their receipt of it.

Gardaí are also awaiting receipt of the court order before they can move in and make arrests.

At the Grangegorman site, a number of the squatters, who did not wish to be identified due to their legal situation, said they were transforming the site into an “urban garden” with a focus on sustainable living.

The 4.2-acre site contains three warehouses, in which living spaces have been constructed.

There are kitchens, shower facilities, art and music studios, as well as a garden where plants and vegetables are grown.

The site has also been used by local community groups and a circus troupe for training.

One man who has been squatting on the site for eight months said it was not simply an area where the squatters reside, but a place where the wider local community comes for events and to make use of the facilities that have been constructed.

“It isn’t a hang out place. It’s not for people to get lazy. There is a point to getting up and doing all this. It’s to use the space. We all work for a living too so we don’t want to be lying around doing nothing.”

Another man said gardaí had reported a drop in antisocial behaviour since children from the local area began congregating there.

“We have kids who come in here and are spoken to about morality and respect,” he said.

“They are shown to get involved, get their hands dirty, learn a bit about gardening, and they’ve been receptive to that. We’ve a couple of kids who have really turned.”

A woman staying on the site said the community would suffer if the site were sold. “We know the nature of squatting and what happens, and we all knew that someday something like this might happen,” she said.

“The only disappointment for me would be the people in the community who can’t use it anymore. There are kids who play here because they have been waiting for a playground for 12 years.

“There are people homeless on the street who have to stay here sometimes. There are people from Kirwan St who can’t put food on their families’ tables so they come down here and get free food from us.