Woman says ‘no political agenda’ behind move; Minister says people should be ‘horrified’ 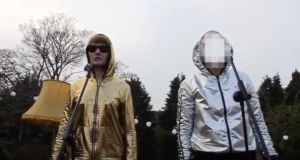 Screengrab of ‘Pixel’, a gay teacher at the centre of a social media storm around her need to protect her career by pixelating her face for a lip-syncing Newstalk wedding competition.

‘Pixel’, a gay teacher at the centre of a social media storm around her need to protect her career by pixelating her face for a lip-syncing Newstalk wedding competition , has said “there was no political agenda behind it”.

“We did the pixelation as a precaution more than anything. I didn’t expect people to feel so passionately about it,” she told The Irish Times

In support of the teacher, Minister of State at the Department of Justice Aodhán Ó Ríordáin told The Irish Times that “people should be horrified to live in a country where people think they have to pixelate their faces in a competition to protect their jobs.

“Under Section 37 of the Employment Equality Act, Dr Leo Varadkar, Minister for Health, could have legitimate difficulty getting a job in a hospital as an openly gay man, as could John Lyons and Jerry Buttimer, who could not be employed teaching because they are openly gay and might be seen as no upholding the ethos of the school,” he said. He pledged to have the Act changed by Easter.

‘Pixel’ now believes it was “naïve” to enter the competition with her partner Caoimhe Hickey. “It’s scary when something like this grows legs and creates concerns about your job. We’ve had some wobbly moments,” she said.

The Newstalk radio ‘Open to All’ competition with the Moncrieff Show requires couples to lip-sync a song in a YouTube-style performance and the prize is a wedding and honeymoon worth €20,000.

In ‘Pixel’s’ case, her face is obscured so that her lips cannot be seen, apart from a close-up where only her lips are visible. Despite this, ‘Pixel’ and her partner Caoimhe Hickey have reached the final five by public vote.

The woman says she is “taken aback by the scale of the backlash” against her and Caoimhe by social media commentators accusing them of deliberately using the competition to highlight employment inequality for gays and lesbians .

“We entered because we can’t afford to get married. The cost is way beyond us. We did it in a very genuine way with genuine sentiment behind it. It was never meant to be a political bashing stick or to grow legs as it has. It was just our way of entering to make the best of our situation.”

Under Section 37 of the Employment Equality Act, gay and lesbian teachers can be refused permanent employment, promotion and transfers if they do not uphold the ethos of their employers. ‘Pixel’ is a permanent teacher in a Catholic school.

A former school principal, Mr O’Ríordáin said he knew of a case “where a teacher went to a principal to ask for his cooperation in covering up that he was gay. I also know of a teacher who went to the principal to say she was unmarried and pregnant, and was her job safe? Section 37 affects not just the LGBT community, but also divorced and unmarried parents.”

‘Pixel’ said she does not regret entering the competition and will keep her identity secret should she win.

“My concern would be that while I have a strong feeling that the majority of students would be supportive, other denominations and faiths may feel differently and I don’t want any negativity around it. I don’t discuss my private life with the students, ever. I have a very positive career, very supportive colleagues and my concern is that it would jeopardise my professional teaching relationships.”

The competition results will be announced on Friday. “I hope we win and maybe more people will be made aware and it will encourage dialogue,” ‘Pixel’ said.