Document will provide a ‘light’ for communities, says clubmate of Adrian Donohoe 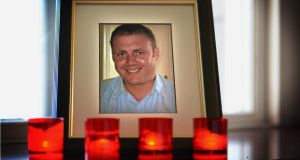 The GAA’s new response plan for deaths, suicides and other critical incidents will provide a “light” for communities in the aftermath of tragic events, according to a clubmate of murdered Garda detective Adrian Donohoe.

The document which was unveiled at Croke Park on Wednesday will offer clubs and counties a blueprint for dealing with trying and unexpected situations ranging from deaths, illnesses and injuries to instances of severe depression which may affect team members or people within the locality.

According to GAA president Aogán Ó Fearghail, the organisation’s health and community team receives between 30 and 40 requests each year from clubs and counties seeking help in dealing with critical incidents, which it defines as “a situation that overwhelms one’s natural capacity to respond”.

“We have close to 1 million members, 20 per cent of those are outside of Ireland. They are real individuals and if we were only an association of one member, you must look after that member,” he said.

“We instantly know each other, we recognise each other, we like to beat the daylights out of each other on pitches and on the fields of dreams but by golly we stand up for each other, we protect and we help each other,” he added, before stressing the need for a consistent approach in line with best professional standards.

Also mentioned was the case of Galway intercounty hurler Niall Donohue who died in 2013, and National Office for Suicide Prevention director Gerry Raleigh said that as an organisation which permeates almost every level of Irish society, the GAA is optimally placed to minimise the “risk of contagion” among young people in particular following a suicide.

Casting his mind back to January 25th, 2013, when Garda Donohoe was gunned-down following a robbery at Lordship credit union in Dundalk, Alan Scully, who is the chairman of local GAA side St Patrick’s, said the club found real difficulty in trying to deal with the intense publicity caused by the incident alongside a keen sense of loss.

“Adrian was a huge presence in the club, and the night of the incident when Adrian was murdered, it was just numbness. That Friday night and Saturday morning everybody was just extremely numb and shocked.

“We were dealing with press from all over the world, and as an amateur organisation it was very difficult to deal with it at the time because we were dealing with our own sense of loss . . . We had a lot of under-16 guys who were very impressionable and very shook by what happened to Adrian.”

“It’s like somebody turning off the light and you really don’t know what to do, and you’re walking around trying to find your way and I think this document will shed some light on it.”

The generic version of the plan can be openly downloaded from gaa.ie/community, but individual clubs are encouraged to tailor its contents to suit their own area’s particular needs and resources.