Opinion: Ireland is more isolated than ever in having failed to take action 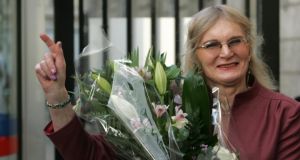 In March 1993, almost 21 years ago, transgender woman Lydia Foy wrote to the registrar general asking for a new birth certificate in her female gender. She was refused and she took her case to court. In October 2007, 6½ years ago, the High Court ruled the State’s lack of any legislation to recognise transgender persons in their preferred gender was in breach of the European Convention on Human Rights .

Minister for Social Protection Joan Burton finally published heads of a Gender Recognition Bill to deal with this issue last July, but sections have been robustly criticised by the Oireachtas Joint Committee on Education and Social Protection.

The committee welcomed the Minister’s decision to bring in legislation, but in a detailed analysis of the draft Bill called for lowering the minimum age at which persons could apply to change their registered gender from 18 to 16.

And it urged dropping a section that would require married transgender persons to divorce their spouses as a precondition for recognition in their preferred gender. Similar legislation in Austria and Germany has been ruled unconstitutional.

Submissions
The committee had met last October to hear submissions from the Department of Social Protection, Transgender Equality Network Ireland, parents of transgender children, the Ombudsman for Children, the Equality Authority and Flac (Free Legal Advice Centres), which has represented Ms Foy through her legal battle for recognition.

There was agreement across all non-departmental submissions that while the draft Bill was an improvement, it contained serious flaws. The committee members endorsed many of the criticisms. They seemed particularly affected by the evidence from parents of transgender children about the problems their children faced at school, and well before they reached the age of 18. This was also supported by the Ombudsman for Children.

As well as lowering the age for applying for gender recognition, the committee proposed that guidelines be developed to support acceptance and inclusion of “trans” children in schools, and that sporting bodies should develop policies for the participation of “trans” persons.

The committee also recommended reviewing a section that would have required medical evidence to support all applications for gender recognition. And it called for consideration to be given to amending the Equality Acts to specifically outlaw discrimination on the grounds of gender identity – something that was promised in the programme for government, along with gender recognition legislation.

Thorough critique
The heads of Bill must now go back to the department for reconsideration in light of the committee’s unusually thorough and forthright critique of the current proposals, recognising that the vast majority of those directly affected by the Bill want these changes made.

It is a concern, however, that the Government’s latest legislation programme doesn’t include the finalised Gender Recognition Bill in the list of Bills to be published by July. It says it is not possible to say when it may be published.

The declaration made in Lydia Foy’s case that Ireland is in breach of the European Convention on Human Rights (ECHR) for failing to recognise transgender persons was the first ever declaration made under the ECHR Act, 2003, which was intended to incorporate the human rights convention into Irish law. It shows very little respect for the State’s obligations under the convention that no action has been taken to remedy this breach six years later.

Mr Justice McKechnie said in the High Court when making the declaration in the Foy case that “Ireland as of now is very much isolated within the member states of the Council of Europe” on transgender recognition. We are even more isolated today.
When the Minister published the heads of the Bill last July, she said she was “very aware that the long-standing lack of legal recognition has caused ongoing hurt as well as real practical difficulties” to the transgender community. This situation will continue until an amended and more inclusive Bill is passed into law.

Credit
The Minister has deserves credit for being the first to bring in draft legislation to protect transgender rights, but it is now a matter of real urgency to deal with this issue and with the criticisms of the heads of the Gender Recognition Bill.

The Oireachtas committee has produced what it describes as “a practical, sensible and balanced report”.

The Minister should accept its recommendations, which have been welcomed by the transgender community, and press ahead as soon as possible with this modest but important piece of legislation.

Michael Farrell is the senior solicitor with Flac, which has represented Lydia Foy in her struggle for legal recognition