‘We are sleepwalking into a great alienation of our European publics,’ President says

The European Union’s response to the migrant crisis in the Mediterranean had been a “failure”, 'grossly inadequate' and 'shameful', President Michael D Higgins, has said. The President was speaking at an Amnesty International meeting in Dublin. 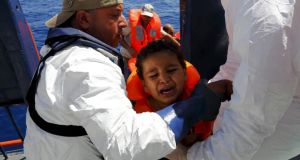 A child migrant is brought aboard the Migrant Offshore Aid Station (MOAS) ship MV Phoenix after being rescued from an overloaded wooden boat 16km off the coast of Libya, August 6th, 2015. Photograph: Darrin Zammit Lupi/Reuters

The European Union’s response to the migrant crisis in the Mediterranean had been a “failure”, “grossly inadequate” and “shameful”, President Michael D Higgins has said.

He said the failure undermined “both the ideal of the European Union and any prospect of that union being an exemplar for international law and its instruments”.

Delivering the opening address at Amnesty International’s 32nd international council meeting in Dublin on Friday, the President said there was a a growing “crisis of legitimacy and accountability” in European politics as “the imperatives of a single hegemonic model of economics take precedence over the needs and expressed wants of the people”.

“I believe that we are sleepwalking into a great alienation of our European publics,” he said.

In a speech titled ‘Campaigning for Human Rights in the Contemporary World’, the President alluded to the ongoing economic and humanitarian crisis in Greece as the government there attempts to meet the demands of its euro zone creditors, as well as to moves by the Conservative government in Britain to weaken the jurisdiction of the European Court of Human Rights in that country.

He said many in power dodged certain issues “to avoid, in their fear, the wrath of populism” - and one of these issues was migration.

Describing “displacement” as the “greatest human rights issue facing the world at this time”, he said: “I fully share with others a great sense of horror and outrage at the tragic loss of life in the Mediterranean Sea – already 2,000 this year. This is a tragedy that was brought home to us all again in recent days as more lives have been lost off the coast of Libya.”

Praising the work of the Irish Navy in rescuing 367 people from drowning there this week, he said: “However, we must acknowledge that the European response as a whole has been grossly inadequate, with Italy, Spain, Malta and Greece left struggling to cope with large influxes of refugees and migrants.

“This failure can only be described as shameful, and it undermines both the ideal of the European Union and any prospect of that union being an exemplar for international law and its instruments.”

The crisis raised “profound questions as to what we mean by solidarity and universality of rights at the global level”, particularly given that the countries accepting the highest number of people fleeing states such as Libya, Syria and Eritrea, were the poor countries on their borders – “countries who receive grossly inadequate support”.

“Given this reality presented to us on our [TV] screens, we must ask how so much of our discourse has focused on questions of security and border control, on alleged ‘pull factors’, to the neglect of the full and terrible reality of the conditions from which the people are leaving, and the role of the wider world, including ourselves, in those zones of conflict.”

The main body of his speech centred on harm being done to human rights, in Ireland and across the world, by “dominant and unaccountable economic forces”.

“The cutting edge of human rights then is in the arena of economic, social and cultural rights, precisely because this is where the function of human rights as the primary moral standard against the excesses of neo-liberalism is most acutely felt.”

He said a recent report from the Council of Europe on the human rights implications of austerity on the people of Europe had provided “a powerful illustration of the relevance of [economic, social and cultural rights] standards to our current situation”.

“We may well ask why,” he added, “this topical report has not received more attention in our parliaments and in our media.”