Encouraging emigrants back is ‘issue of national importance’ 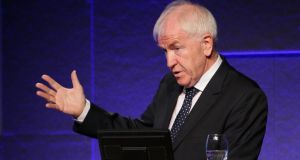 Minister of State for the Diaspora Jimmy Deenihan TD speaking at ‘Home is Where the Heart Is’ conference on return migration from a youth perspective organised by the National Youth Council of Ireland at Dublin Castle today. Photograph: Marc O’Sullivan

Providing opportunities for young Irish emigrants to return to live in Ireland is “an issue of national importance”, the Minister of State for the Diaspora has said.

Speaking at a conference on return migration hosted by the National Youth Council of Ireland in Dublin Castle today, Jimmy Deenihan said a cross-Governmental and inter-agency approach was needed to help as many recent emigrants to move back to Ireland as possible if they wish to do so.

“Losing so many of our young people to emigration is a huge blow to our society,” Mr Deenihan said.

“We lose their innovation, their creativity and their capacity to challenge established norms and ideas. It is vital that we encourage as many of these back to Ireland as possible. We need their fresh thinking.”

Around 40,700 Irish people moved abroad in the year to April, the latest figures from the Central Statistics Office show, bringing the total number of Irish who have left the country since 2008 to 241,300.

Just over half that number have returned to live in Ireland in the same period, but the numbers are falling. Just 11,600 Irish people moved back last year, the lowest rate of return since the CSO records began in 1996.

The Minister said employment prospects was one of the most important motivating factors for migrants, and Irish people abroad must therefore be provided with opportunities in their chosen fields and professions in order to encourage them to return home to live here.

The fall in unemployment from a peak of 15.1 per cent in early 2012 to 11.2 per cent last month should provide encouragement to Irish people abroad who are hoping to return, he said.

But a lack of jobs here is not the only barrier preventing Irish emigrants from returning, Marie-Claire McAleer of the NYCI said. Precarious working conditions, poor salaries and a lack of opportunity for career progression were issues mentioned by emigrants interviewed by the NYCI. Skype interviews with four young emigrants were screened at the conference.

The cost of housing and childcare, high taxes, a difficulty accessing school places for families with children, and a lack of transferable history with banks and insurers are also issues concerns, Ms McAleer added.

A plan to attract young people back needs to be implemented urgently, she said, because the longer recent emigrants stay away, the more likely they are to put down permanent roots abroad. A failure to attract young emigrants back to Ireland in the long term would have “serious social and economic policy implications for Ireland”.

“Any future upturn in the economy requires a pool of well-educated and skilled young people to attract investment and stimulate and sustain economic growth,” she said.

A new diaspora policy, due to be published by the Department of Foreign Affairs in the coming months, will include an outline strategy to help recent emigrants to return to Ireland if they wish to do so. The policy paper will be based on more than 120 submissions received from Irish organisations and individuals around the world received in the last six months.

Mary Gilmartin of Maynooth University, who specialises in migration research, said the structural barriers created as a result of years of austerity, such as the public sector recruitment ban, are the main reasons why return migration is at an all time low.

“Issues of inequality and social injustice that are resulting because of austerity means we are creating a society that not many people want to return to,” she said.