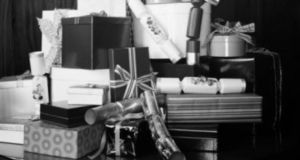 Vast emigration haemorrhage of the 1950s, which included all my classmates, dictated a continuance of the selective generosity of Santa.

Our mother was carving the turkey in the middle of the room. Our father got us spoons and led us around her and the kitchen table, banging the spoons , singing “Old Soldiers like the Leg of a Duck” to the tune of the “Soldiers’ Chorus” from the opera Faust by Charles Gounod.

There was more music during those Christmases of more than 60 years ago now, aside from Old Soldiers, music from an old (even then) record player which my father would wind up and play 78 records Songs sung by John McCormack, Fr Sydney McEwan, Nelli Melba, Joseph Locke, Enrico Caruso.

Santa was generous those times. I got a jeep that Christmas, one of my brothers, David, got a cowboy suit, which he has worn ever since.

He also got guns - the guns were decommissioned on St Stephen’s Day, after which there was a peace agreement. Another Christmas Santa brought me a bicycle, a red bicycle, which kept me going into my teens.

Santa was not as generous to my school mates in the Broadford village in Co Limerick.

He seemed to by-pass some homes entirely, homes that could have done with a visit from him, homes that never rang with the voices of John McCormack, Fr Sydney McEwan, Nelli Melba, Joseph Locke, Enrico Caruso or to the tune of the “Soldier’s Chorus” by Gounod.

The dads of some of my school mates used to come back from England for Christmas and while there was great excitement at first on the arrivals, which were sometimes accompanied by sparse presents, there was often tensions afterwards.

The dads would have had a few too many drinks. There would be shouting, the banging of doors and tears.

On Stephen’s Day several of my mates would go on the “wran”, the wren boys tour of Broadford and surrounding villages, playing accordions, tambourines, the odd fiddle and tin whistle.

Some of the Broadford bands were good, almost all of the bands from Dromcollogher, Tullalease, Ashford, and Feoghanagh were awful.

They’d parade into the kitchen, once the back door was opened to them, and then play tunelessly and interminably - maybe up to 12 of them and not one of them with a note. But they’d make a fair bit of money for themselves, to make up for Santa’s parsimoniousness.

As the years went by, the Christmases became bleaker for many. Several of my school classmates were farm labourers for a few years. They’d go to the hiring fair in Newcastle West, where they would be looked up and down by farmers, as though they were cattle and then would be signed up for a year - or was it 11 months? - for, I remember, £150 for the entire period, probably around €3,500 in today’s terms.

They then emigrated to England when they were 17 or 18, every one of a class of 12, bar one other boy and myself.

Santa didn’t bother with some of them there either. Some lived happy and fulfilled lives there, with lots of children of their own. Others lived lonely miserable lives, the misery relieved only by drink, when later made their lives even more miserable.

Around the time many of them went to England, the report of the Commission on Emigration and Other Population Problems was published. The Commission was comprised of senior civil servants, economists, clerics and other distinguished citizens.

One of the distinguished citizens, an eminent member of the legal profession and an influential member of Fine Gael, added a reservation to the main body of the report, He wrote: “I cannot accept . . the view that a high rate of emigration is necessarily a sign of national decline or that policy should be over anxiously framed to reduce it …… I believe there should be a more realistic appreciation of the advantages of emigration. High emigration, granted a population excess, releases social tensions which would otherwise explode and makes possible a stability of manners and customs which would otherwise be subject of radical change”.