Emergency forum on homelessness to be convened on Thursday 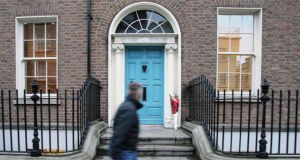 A man walks past flowers left on Molesworth Street, near Leinster House in Dublin, where a man was found dead on Monday. Photograph: Niall Carson/PA Wire

A special forum on homelessness is to be convened this Thursday by the Minister for the Environment Alan Kelly.

There were calls for an emergency summit after a man sleeping rough died on Molesworth Street in Dublin city centre on Monday.

Archbishop Diarmuid Martin, backed by Lord Mayor Christy Burke, called for the “public summit” of all those involved in fighting homelessness, together with municipal and political and business leaders in Dublin, to address the “immediate question of emergency accommodation for the homeless.”

The forum will include the CEOs of the four Dublin local authorities, the Lord Mayor of Dublin, Cathaoirligh of South Dublin, Dun Laoghaire/Rathdown and Fingal, as well as the non-governmental organisations working in the sector.

The Minister is also inviting the Catholic Archbishop of Dublin, Dr Diarmuid Martin to meet with him on Thursday.

Early, Mr Burke had offered to host the summit in the next 72 hours adding it must involve decision makers in the area and has to include a high level representative from the Department of the Taoiseach.

“Homelessness is a greater problem now than it has been in many years,” Mr Burke said. “ What we can do now is work together to ensure we are using the resources we have more effectively.”

Archbishop Martin said in a statement he is “very deeply concerned about a deeply divided Dublin where on the one hand there is rejoicing at increased spending over the Christmas period and on the other hand where the number of those homeless and hungry is actually increasing.”

Mr Kelly said he wants to address the serious challenges posed by homelessness in the Dublin region. “I want to focus attention and activity on this issue which is very important at any time but is particularly sensitive at this time of year. The forum is designed to see what further collective actions can be taken by Government, the local authorities and the voluntary sector. The issue of homelessness is complex and is about much more than just funding and money. As a state we are spending over €1 billion on various housing supports and builds and are increasing the budget to deal with homeless services.”

The man’s death was described as “a horror” by Minister for Public Expenditure and Reform Brendan Howlin. Speaking on his way into Government Buildings on Tuesday, he said there was an crisis in relation to people sleeping rough.

“It’s beyond a tragedy, it’s just a horror that somebody would die on our streets,” he said.

Mr Howlin said he would embrace any ideas coming from the Archbishop of Dublin Diarmuid Martin – who on Monday appealed to people in parishes to donate food to meet a demand which is greater now than last year – or anyone else to help improve the situation.

Mr Howlin said the issue was not money but housing supply. Housing organisations could not keep up with demand. “We now need to provide housing for people who need it,” he said.

Speaking on Morning Ireland, Archbishop Martin said the public need a greater awareness of the challenges that face homeless people

“We need to raise public awareness of the challenges that are there, both with regard to hunger, to homelessness, and to the problems of many young people using substance abuse on our streets.

“I’d hate to think that the death of this man would turn into a one-day outrage, blaming various people for this, and then we all go back into our shells.”

“There isn’t just a lack of houses – the availability of houses for young people is actually going down. The young people under 21 and under 25 find it almost impossible to get social housing, and as a result there employment opportunities aren’t there. At the same time we’re rejoicing in the amount of money we’re to spend over Christmas.

“Homelessness is always a symptom of deeper social problems. Every homeless person is somehow a failure of our social service systems whether it be health, education, housing policy or immigration policy, we need to get all these things together.

“Look at the facts – we haven’t got the answers right. Promises won’t bring the answers, we need to start seeing that things are done.”

A candle lit vigil, organised by People Before Profit TD Richard Boyd Barrett, will be held outside the Dáil at 5.30pm today to highlight the homelessness issue.