Tents, sleeping bags and clothes can be left at the Global Green area on Monday after 10am 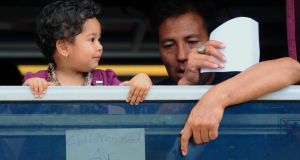 Electric Picnic festival-goers are being asked to consider donating tents, blankets, clothes and sleeping bags after the weekend’s celebrations as part of an initiative to collect supplies for refugees and migrants Calais.

The recently established Cork Calais Refugee Solidarity, along with the Calais Refugee Community and Dublin Simon Community, are accepting donations of camping equipment and clothing in good condition at the Global Green area of Electric Picnic from 10am on Monday.

Elaine Ní Meirtneach, who set up the Cork Calais Refugee Community with Tracey Ryan three weeks ago, is asking festival goers to donate items that are in usable condition.

“They need good quality stuff after the flooding at the camp during the week. People need to take down their tents, pack them up and make sure they have all the pegs. We also need good sleeping bags and sleeping mats.”

Organisers have arranged for an articulated lorry to transport the supplies from Cork city to Calais at the end of September. They have also set up a gofundme.com page to raise funds for the volunteer effort working to house and support refugees in Calais.

The Global Green and Greencrafts area is situated to the right of the main stage, beside the Boutique camping.

A statement from Electric Picnic released on Friday asked attendees to consider donating tents rather than just abandoning them. Picnickers can also leave their packed up tents at the information tents in campsites.

People interested in supporting the fund who won’t be at this weekend’s Electric Picnic can contact the Refugee Solidarity group by visiting the group’s Facebook page and calling one of the many organisers located in towns and cities around Ireland.

The group are particularly interested in collecting the following items:

The Irish Refugee Council (IRC) also called on Irish people to support their local Calais solidarity group while also contacting local TDs and taking part in the Day of Action on Saturday, September 5th where people will gather at 1pm at Famine Memorials around the country to hold a minute’s silence.

Chief executive of the IRC Sue Conlon described the international response to the refugee crisis so far as “totally inadequate”.

“We are in extraordinary times. This is the greatest refugee crisis since the second world war, and Europe is failing to respond to desperate cries for help. The response so far has been totally inadequate.

“Unless we act quickly with courage and compassion, more lives will be lost, more families will be destroyed, and the bodies of more children will wash up on European shores.”