Ibrahim Halawa ‘unlikely to be released’ until trial process is concluded 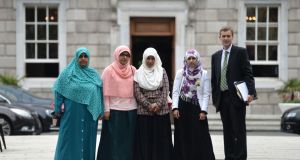 Minister for Foreign Affairs Charlie Flanagan has reiterated that the final decision to release Irish teenager Ibrahim Halawa (19), who has been detained in Egypt for almost two years, will be taken by the Egyptian authorities.

The Minister’s comments follow reports that a number of unexplored legal options are still open to the Government in securing Mr Halawa’s release.

Speaking before the Oireachtas Committee on Foreign Affairs on Wednesday, Mr Flanagan said the legal submission made by civil liberties firm Doughty Street Chambers was based on the “incorrect belief that the Government has thus far not taken any action with regard to what’s known as the presidential decree,” adding that such an application had already been made on Mr Halawa’s behalf.

“What has been urged in the legal submission given to the newspapers, and referred to in today’s Irish Times, is really nothing new,” said the Minister. “It’s already been done months ago.”

Mr Flanagan said the presidential decree could not be applied during the course of Mr Halawa’s trial. He added that Mr Halawa’s “citizenship status under Egyptian law may well be a further complicating factor”.

He said: “Based on our consultations with other international partners, the available information suggests that it is unlikely any decision to release Ibrahim, either under the presidential decree or on bail, until after the trial process is concluded.”

Mr Halawa, who was arrested in August 2013 at the al-Fateh mosque in Cairo, is charged with a number of offences including terrorism, murder and use of explosives.

He is on trial with 493 other prisoners who were detained in the aftermath of the ousting of Muslim Brotherhood president Mohamed Morsi.

Mr Halawa’s trial was adjourned earlier this month and is scheduled to take place on August 2nd after the Muslim holy month of Ramadan. It is understood that Mr Halawa has been on hunger strike since early June.

According to the Mr Flanagan, Mr Halawa has been visited 42 times by Irish embassy officials since his arrest.

“We are all on the same side here, seeking the best for an Irish citizen in difficult and challenging circumstances,” he said.

Senator Mark Daly said it was “unacceptable” that Mr Halawa, an Irish citizen, was approaching his 700th day in prison in Egypt.

Mr Daly highlighted research carried out by human rights organisation Reprieve which found Mr Halawa had been subject to torture while in prison, including “the use of whips and chains, blindfolds, denying medical treatment, psychological torture by prison guards and solitary confinement”.

Senator David Norris called on the Government to stick to the position that Mr Halawa is an Irish citizen.

“The Egyptians are resisting this and claiming him as an Egyptian citizen,” said Mr Norris.

The detailed legal opinion compiled by barristers at Doughty Street Chambers, a civil liberties firm, reported the Irish Government can either make a formal request for Mr Halawa’s transfer to Ireland as set out by Egyptian law, take diplomatic action to protect his human rights under international law, or put Egypt on notice of potential legal action for breach of its obligations at the International Court of Justice.

Young homeless mother may have been dead in tent for a number of days 17:41
Man jailed for five years for killing 7ft 5in Belarusian man 17:00
Boy not screened for hip problem at birth settles action for €120,000 16:21
Second-level teachers vote for industrial action over school safety and pay 16:10
Mother and two children found dead at south Dublin house 15:55