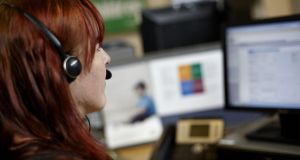 The number of first-time callers to the national helpline for victims of rape and sexual assault was more than 50 per cent higher last year than the number in 2013, new figures show.

The number of first-time callers to the national helpline for victims of rape and sexual assault was more than 50 per cent higher last year than the number in 2013, figures published this morning show.

The 2015 annual report from the Dublin Rape Crisis Centre also says there has been a “resurgence” in reporting of childhood sex abuse as well as a “noticeable” increase in levels of hopelessness among callers.

Also noted was a growing willingness by people who had been raped or sexually assaulted by someone they knew to report the crime to the Garda.

“A total of 11,789 counselling contacts were responded to by helpline staff, comprising 10,468 helpline calls and 1,321 contacts via emails, text and social media,” says the report.

“While a huge demand for all the services of the DRCC existed in 2015, we experienced a resurgence of childhood sexual abuse as an issue both on the helpline and in therapy.”

Of the calls last year, 51 per cent or 3,736 related to sexual violence experienced in adulthood.

The increase in the number of first-time callers translated into an increased demand for face-to-face counselling sessions, and new clients made up almost two-thirds of these.

Of the 499 individuals seen last year, 318 were seen for the first time. They were 33 different nationalities.

There was a “noticeable increase in the level of hopelessness among callers” often due to financial difficulties with homelessness and the fear of becoming homeless.

“Many callers felt they had fewer options to improve their situation or were unable to access the psychological support they needed. Others expressed anxiety about the lack of mental health services and being on long waiting lists.”

In the past clients would be more likely to report assaults to gardaí if perpetrated by a stranger, the report said, but “it is noticeable again this year that for victims of recent and past rape there is a greater willingness to report persons known to them than was the case in previous years”.

Dublin Rape Crisis Centre chief executive Noeline Blackwell has called on all legislators to make the Sexual Offences Bill a priority in the Autumn.

“I hope we won’t have to wait long for this legislation to pass and that this upcoming generation of children will never have to report sexual abuse,”

She said on RTÉ’s Morning Ireland as the service published its annual report.

“We bring the information to the policy makers to identify and highlight the problems in the system in the hope of getting the problems rectified.”