Disability protesters say budget plans a ‘kick in the teeth’

A number of disability organisations are taking part in a day and night vigil outside government buildings. They hope to persuade Ireland to sign the UN convention on the Rights of Persons with disabilities while highlighting other issues. 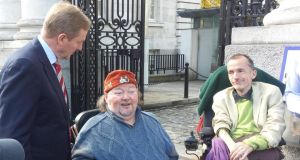 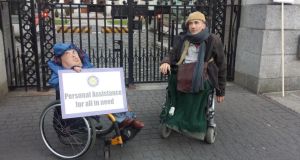 Disability protesters have told Taoiseach Enda Kenny he “kicked them in the teeth” with a Government plan to invest €450 million in nursing homes and institutions over the next five years.

The money would be allocated to the refurbishment and replacement of State-owned nursing homes for older people and facilities for people with disabilities, the Minister of State with responsibility for Disability Kathleen Lynch said.

The funding is part of the Government five-year spending plan on capital projects set to be announced next week.

The Cabinet’s Economic Management Council, which includes the Taoiseach, Tánaiste, Minister for Finance, and Minister for Public Expenditure, is meeting on Wednesday to discuss the plan.

A group of protesters, on day two of their three-day sit-out protest at the gates of Government Buildings to highlight cuts to services over seven years of austerity, spoke to Mr Kenny on Wednesday.

Mr Kenny stopped to drop off a coffee he had promised to one of the “very cold” protesters who had persevered through the night.

Martin Naughton, who is leading the People with Disabilities campaign, told the Taoiseach the group was upset at the plan to give funding to the institutions.

“We got a right kick in the teeth from you this morning, from your Government – €450 million going to build more institutions,” he told the Taoiseach. “All our lives are dedicated to closing them down.”

Mr Kenny replied that the Government had not signed off on any aspect of the coming budget yet.

“Please don’t. Please don’t because I tell you we’re going to lie down wherever it takes,” Mr Naughton told the Taoiseach.

Mr Kenny told the campaigner he would invite him and other representatives of the group to discuss areas where they felt disability funding was being wasted.

“Give practical examples of how that can be turned around. I’ll be very interested to meet you to hear that,” he said.

Mr Naughton, who uses a wheelchair, told The Irish Times the group was “disgusted” after hearing the budget plan following the 20-minute conversation protesters had with the Taoiseach on Tuesday.

“Couldn’t believe it. Who is the Taoiseach listening to? We, who have lived in the institutions and escaped them are disgusted by the news,” he said.

“We’re trying to get people out of institutions so they can live in the community.”

Mr Naughton said the decision to take to the streets was prompted by “appalling and alarming” reports about the treatment of people, mainly with disabilities, at some residential centres.

Mr Naughton said people were coming on buses from across the country, including Co Donegal and Co Clare, to join the demonstration that started on Tuesday with a group of 20.

He said people with disabilities should not have to “camp at the doors of power to be heard”.

“The street is a very cold place to be. We shouldn’t have to do this. But this is what we have been driven to. We have to fight for our recognition as independent and equal citizens of Ireland.

“We know how things can be improved and it is not by pumping money into residential centres. We, and our families, can make decisions for ourselves about the best services we need to live our lives.

“Ireland’s 600,000 people with disabilities and their families are at breaking point.”

Protester Róisín Dermody said it was a “very, very cold night on the street but luckily no rain.

“My nose is freezing, it is really cold. But it’s important to be here. They’re completely missing the point and side-stepping the reason we’re here,” she said.

“People with disabilities need direct payments so they can live with dignity and respect.

“A lot of disabled people are not in a position to be able to come out here to protest. I’m able to be here and I’m here on my own behalf and for those who can’t be here.”

The People with Disabilities group, which includes physical and intellectual disabilities, claim more than 68 per cent of people who use disability services endure poor service are are very dissatisfied.

The campaign highlighted 8,000 people with disabilities live in residential centres, 1,000 people under 27 live in long-term care including nursing homes.

Minister for Agriculture Barry Cowen sacked by Taoiseach 10:17
Cowen ‘surprised and disappointed’ after being sacked on the phone by Micheál Martin 10:02
Dry spells and sunshine on St Swithin’s Day - will it last for 40 days and 40 nights? 09:33
Covid-19: Overseas visitors are causing ‘stress and anxiety’ in some areas, TDs say 05:10
Three visitors investigated by Garda after refusing to fill in locator form 04:45