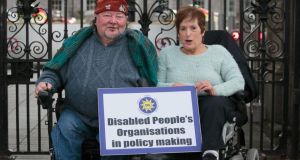 Disability protesters Martin Naughton from Baldoyle and Ann Richards from Knocklyon at a protest to draw attention to inequalities and abuses experienced by people with disabilities and their families due to funding shortfalls and cuts at Leinster House on Thursday. Photograph: Gareth Chaney Collins

Disability protesters vow to return after a three-day campaign outside Government Buildings ended with “disappointment” following a meeting with the Taoiseach.

The campaigners took to the street on Tuesday to highlight cuts to disability services over seven years of austerity.

Martin Naughton, who leads the People with Disabilities campaign, said representatives of the group had met with Taoiseach Enda Kenny and Minister of State with responsibility for disability Kathleen Lynch for almost two hours after an overnight sit-out on Merrion Street.

“We really thought we’d get something concrete from it,” he said.

“After a very short period of time, it became obvious to us that they either didn’t understand what we were looking for, or they didn’t want to understand.”

Mr Naughton, who uses a wheelchair, said that the focus of the conversation was “the same old models that haven’t and don’t work”.

“If the Government continues to go down the route of refurbishing and building home care and residential settings, as they have announced, they will have to put people into those homes. We need to get away from this model of incarceration and move towards a system of self-directed living supports and direct payments.”

Mr Naughton said it was “appalling and alarming” reports about the treatment of people, mainly with disabilities, at some residential centres that initially prompted the street protest.

“We want to repeat, don’t give out money to large national institutions.”

When the Taoiseach stopped to speak to the protesters earlier that day, Mr Naughton had told him they felt “kicked in the teeth” with reports the Government plan to invest €450 million in nursing homes and institutions over the next five years.

Mr Kenny replied no aspect of the coming budget has been signed off yet.

Mr Naughton said although the group were “tired, exhausted and disappointed” after the protest, they were overwhelmed by support from the public.

“We’re not going away. We’ll keep fighting for our rights,” he said.

“We didn’t stay out here for three days to shake hands with the Taoiseach.

Mr Naughton said they would continue until the Government “understood” the need to move towards systems and policies that allowed people to live independently in their own homes and communities.

“The money of Irish taxpayers is going to national organisations so that they can tell us when we can go to the toilet, when we can eat, when we can sleep, what we can dream of... we want those choices to be our choices.”

Michelle Gaynor, who was also present at the meeting, said a positive was the Taoiseach committed to ratify the UN Convention on the Rights of People with Disabilities (CRPD)this year.

“I really hope they do because we’ve been waiting eight years,” she said.

“We had marriage equality there in May, when am I going to get my equality?”

“I feel disheartened today. I have the same rights as everybody else but without the adequate funding that I need to live my life, I will never ever be an equal citizen in this country and that is not good enough in 2015.”

A spokesman for the Taoiseach said the Government would publish a comprehensive employment strategy for people with disabilities shortly.

“The Taoiseach was happy to engage with the representatives of the disability groups,” she said,

“ Careful consideration will be given to the points raised by the groups.”