Different rural realities on both sides of Border 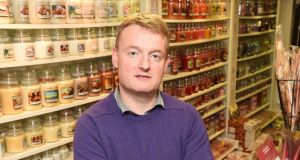 Trevor Magill, who says he is ‘surprised there is more affluence on the north side’, in the post office in Middletown, Co Armagh. Photograph: Philip Fitzpatrick 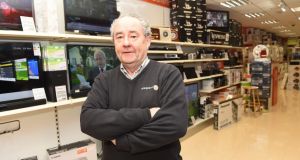 Standing beside a bank of flat- screen televisions in his electronics store, Bernard Marron considers how best to describe the economic reality of Border towns in Co Monaghan, outside of his own Carrickmacross.

“Bandit towns – there is nothing in them,” he says.

As with most retailers in the region, Marron is convinced the economic war with northern towns is being lost because of the consumer tendencies of its own population.

“As the crow flies we are only five or six miles from the North,” he says, livid at the presumption that businesses here cannot compete with sterling.

Carrickmacross is a market town with a population of about 5,000 people. It is generally thought to have fared better than other towns around it.

The zeitgeist here, politically, is that Co Monaghan has been drained of any real influence since the 1990s. There is local industry but not the heavyweight foreign direct investment (FDI) that shapes the fortunes of other regions, and, without a rail service, transportation is limited.

“Monaghan is in a time warp since 1997,” says Fianna Fáil councillor Pádraig McNally, cathaoirleach of Monaghan County Council and national president of the Association of Irish Local Government.

A keen observer of the economic realities, he points to the stalled N2/A5 cross-Border road project as one well-cited example. Once regarded as a critical aspect of economic development, the project appears in limbo, with the Government unable to fund €1.5 million for the planning of a small stretch from Clontibret to the North.

There isn’t much in the way of company investment either. Bose, the speaker manufacturer, and Kerry Foods, have been major employers. The former, says Jim Hand, president of the chamber of commerce, was an IDA-backed project established back in 1978. “That tells you that this region certainly is not seeing any [recent] foreign direct investment and traditionally we have had to fend for ourselves anyway, so any industries are generally local,” he says. “There has always been a perception that the Border and midlands regions have been the poorer relations.”

As far as FDI is concerned, he adds, “we could be in outer Mongolia”.

In the local supermarket, Trisha, whose husband lost his job of 24 years due to the implosion of the construction sector, says thing are not getting easier.

“At this moment I am so pissed off with the Government,” she says. “Our eyes are just open now; it’s constant cuts, and we are asked to pay more and more bills. There is nothing coming back.”

Mark O’Reilly is originally from Co Monaghan, but has lived across the Border for seven years. He built his own home and company, MOR Garage Doors, with government help.

Would he return to the South? “Not in a million years. Healthcare is brilliant. If your child is sick, you ring your doctor and you are seen within the hour and then [you get] the prescription,” he says. “At the moment, there would be more work this side of the Border, but it’s picking up in the South.”

Michael Geoghegan, a car wholesaler originally from Co Cavan and living in Co Armagh for 31 years, agrees there are better services but says the picture is not that black and white.

Certainly everyone knows a civil servant in a land where 28 per cent of employment is public sector, but smaller council offices have been closing. As for infrastructure, “the roads here have gone behind the road network in the South now because of the Celtic Tiger”.

However, not everyone sees the North as superior. “I am surprised there is more affluence on the north side,” says Trevor Magill through the small window hatch of his local post office. “If you go to Monaghan you will see more disposable income. I would find the government here – and it’s probably true in the South as well – they would be a wee bit more [deferential to] the towns and cities, and there would be a bit of rural exclusion [in their approach].”