Almost 50 years since after it was built, demolition started on Joseph Plunkett Tower, the last of the notorious Ballymun flats in October 2015. 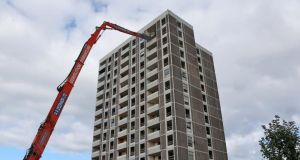 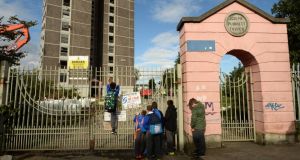 Joseph Plunkett tower, completed in 1967, was one of seven 15-storey blocks built in response to a housing crisis in the 1960s. Photograph: Dara Mac Dónaill/The Irish Times

Almost 50 years since it was built, demolition has started on Joseph Plunkett Tower, the last of the notorious Ballymun flats.

Joseph Plunkett tower, completed in 1967, was one of seven 15-storey blocks, along with 19 of eight storeys and 10 of four storeys, built in response to a housing crisis in the 1960s.

The high-rise prefabricated flats were constructed to accommodate residents of inner-city tenements under the process of urban slum clearances. Their construction was precipitated by two tragedies in the summer of 1963 when tenement houses collapsed killing residents .

In Bolton Street two elderly residents died when their home collapsed in June 1963. Just two weeks later two girls were walking on Fenian Street when two houses toppled into the street killing them both.

Made of pre-cast factory-made concrete panels, the flats were rapidly erected, but the amenities necessary to sustain communities were slow to follow and Ballymun quite quickly became a magnet for social problems, particularly in the 1980s when it became strongly associated with the city’s growing heroin problem.

A €2 billion regeneration project began in 1997, and more than 2,000 new social homes have been built in Ballymun . Demolition of the high-rise towers only began in 2004. While some of the blocks were razed by implosion, Joseph Plunkett tower will be taken down by mechanical means using a long reach hydraulic “nibbler” which will bite its way through the structure over a period of weeks.

The rubble remaining will be reused for projects such as road construction and all removable fixtures are sent for recycling, the council said. A plan for the reuse of the land will be devised next year.

Although the bulk of the redevelopment of Ballymun was completed before the economic downturn, the regeneration of the suburb has not been without its difficulties.

The project was hit in 2007 when it was found that pyrite, the mineral which can cause severe structural defects in buildings, had been used. In the region of €10 million has been spent on fixing the problem.

The property crash in particular held back the development of shopping facilities for the community.

Treasury Holdings in 2009 secured planning permission for Spring Cross, a vast €800 million development which was to include an 11-screen cinema, bowling alley, public library, creche and restaurants, as well as shops and offices.

Treasury had intended to begin construction on the site of the existing dilapidated Ballymun Town Centre, but the site became part of Nama’s portfolio of loans before any development began.

Most retailers in the centre subsequently shut up shop and early last year it lost its anchor tenant, Tesco.

Last year the council, which already owned 47 per cent of the old shopping centre, reached agreement with Nama and its receivers to acquire the remaining 53 per cent and plans to redevelop it in the coming years .

In the meantime, an adjacent vacant site will be developed for shopping by Alanis Capital.