Day for the Eradication of Poverty commemorated in Dublin 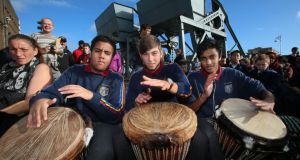 People living in poverty need to be involved in developing the policies that affect them, Lord Mayor of Dublin Oisín Quinn has said.

Mr Quinn was speaking at an event at the Famine Memorial in Dublin’s Docklands yesterday to commemorate UN Day for the Eradication of Poverty.

“As a city councillor and as Lord Mayor, I am conscious that many policies prepared with the best of intentions fail, not totally but to a significant degree. In part that is because they are not designed by the people they are intended to help.”

“The unique knowledge of people based on their own experience of living in the worst conditions, over several generations in many cases, is too often not valued or acted upon.”

“This often results in the policies and programmes meant to eradicate poverty being ill-adapted to the needs, realities and expectation of the people they are supposed to help.”

The commemoration also heard from a number of people experiencing poverty who spokes about its impact on their health, education, ability to access work and housing, and their family lives.