‘Danny fell through the cracks of the system. He’s dead.’ 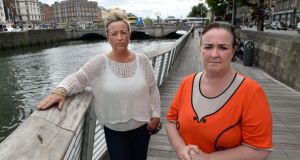 Donna (left) and Deborah Lamb, from Rathfarnham, Dublin, on the Liffey boardwalk at Eden Quay, Dublin, where they talk to vulnerable young people, similar in many ways to their late nephew Danny Talbot. Photograph; Dara Mac Dónaill

Every week sisters Debbie and Donna Lamb come to Dublin’s boardwalk in search of vulnerable young people to help.

Where others see wild-eyed trouble-makers, entrenched drug dealers or violent hoodies, they see damaged young people in need of love and support.

Many are in State care and live in some of the homeless hostels or “out-of-hours” services nearby, which means they are on the street for most of the day without any support. In many cases, theirs are rough- and-tumble lives, scarred by abuse and neglect and now marked by drug or alcohol addiction and behavioural problems.

A few weeks ago Debbie met a homeless 19-year-old, who was four months pregnant when her care placement broke down, after she alleged she had been sexually abused.

“Her face still haunts me,” says Debbie. She hasn’t seen her since.

And just the other day there was a 12-year-old who was being used by older and more streetwise young people to push drugs for them.

Debbie and Donna stop and chat with them.

Many are suspicious at the start, wondering if they’re undercover gardaí or social workers.

But, over the years, they’ve grown strong bonds with some of these most marginalised of young people. “When I see them, my heart breaks,” says Debbie.

“No one wants them, they feel like dirt. That’s why we talk to them.

“People say to us, ‘you’re mad’, but something keeps dragging us back there. ”

Their nephew, Danny Talbot, was one of them. He died in the summer of 2009 following a suspected drugs overdose, while in aftercare services provided by HSE. He was 19 years old.

It was the end of a short life scarred by neglect and ill-treatment and missed opportunities for social services intervention.

Danny was born in December 1989 to Lisa Lamb, a woman with an intellectual disability, and Paddy Talbot.

While his mother moved in and out of healthcare settings, Mr Talbot became the main carer for Danny and his brother at his flat in Dublin’s north inner city.

Soon, however, there were concerns over levels of hygiene and the state of the children, followed by red flags over emotional and behavioural difficulties at the age of just five.

The review team was unable to establish if this was ever followed up because of an absence of records.

When his father died a few years later, Danny was placed in foster care. There is no evidence that the placement was assessed and approved by the health board at the time.

In foster care, his life rapidly began to unravel. He ran away on several occasions and ended up accessing services for homeless boys.

In the “out-of-hours” service, he drifted into a brutal sub-culture of crime and drugs.

Despite the best efforts of some individual social workers, the child-protection system seemed to preside over a slow deterioration in his circumstance

It details an inadequate response to evidence of child abuse and neglect when he was young , a failure to ever fully assess his needs, weak frontline social work practice and unacceptable gaps in record-keeping.

In addition, it found repeated use of “out-of-hours” emergency accommodation was not appropriate for him. In fact, the report states, it exposed him to further risk.

He was a complex young person who presented difficulties and dilemmas for staff who tried to work with him. But opportunities to intervene earlier were missed.

It also notes that his aunts were so concerned for his welfare they went to court on numerous occasions to have him admitted into a special care unit for his own protection. Instead, the requests were met with undue delays and, ultimately, refused.

“This case demonstrates the folly of assuming children are safe merely because they are formally in the care system,” it states.

His aunts feel grateful that this report finally documents the failures to provide proper care for Danny.

But they feel angry that – at least in their opinion – social services are still failing marginalised young people.

“We see them all the time, and we get calls from families who are still being ignored by the care system,” says Donna.

“Danny fell through the cracks in the system. He’s dead now.

“But other children will continue to die until there is some accountability for the service.”