Console phone bill had not been paid for 12 months

Services would have ‘fallen over’ without staff who worked unpaid, says David Hall 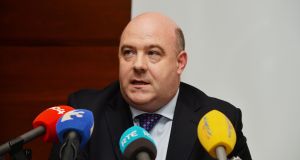 The phone bill of the suicide charity Console had not been paid for 12 months and had an outstanding bill of €23,000, according to David Hall.

The former interim chief executive of the charity cited phone company Eir as an example of some of the good things that emerged from the controversy of the charity’s financial irregularities.

He said when the state of the charity’s finances was known, he rang someone in the company and told him Eir would not be paid “because we’re goosed”.

He then asked him to transfer the phone line to another service so that it could continue, and this was done.

The charity was closed down and its services transferred to Pieta House, which provides similar services.

Mr Hall paid particular tribute to the staff and counsellors at the charity, which he said would have “fallen over” had they not continued to work unpaid for the three weeks he was reviewing the organisation.

Speaking on The Marian Finucane Show on RTÉ with presenter Áine Lawlor, he said that after the RTÉ Investigates report on the charity which revealed large-scale financial irregularities, the staff still turned up for work the following morning, even though they had not been paid for months.

There were 350 people involved in active counselling with 29 people ringing the suicide helpline every day, a third of whom were new clients, he said.

“The service was missed in the drama” about finances, he said. And the question was who was running the show.

He said the staff who loved the charity, were getting bashed around, but they all stayed by their clients, unpaid.

“They were not getting paid but they all came in for three solid weeks to allow me and others go in to try and preserve the service.”

He added that “the biggest bunch of creditors is the staff”.

All of the staff have been offered contracts with Pieta House for the next three months, he said.

Mr Hall, who has worked in the charity sector for 20 years, said he had been called in to do a review. He said “the HSE had done a forensic report, a fantastic, detailed report”. He said “forget about their actions after the report”, the document was excellent.

Mr Hall said the State was getting “huge value for money” from Console because it was only paying half the actual running costs of the service.

He said there was a team effort to sort out the issueswith taxi drivers ringing to offer their services free and other charities phoning offering advice and instruction on governance.

He said there had been seven or eight investigations but nobody really had an appetite to protect the services. People were covering their backs, he added.

When no action was being taken by the HSE to protect the service, he got on to the adviser of Minister for Health Simon Harris and “there was a long engagement” and a meeting the next day.

Mr Hall said the first person “out of the box” after the RTÉ programme was the charity regulator.

It had not seen the HSE report. It was only in place since May 19th.

The regulator sent a letter to all the directors on the Friday that he wanted to see them on the Monday and it emerged that a number of directors did not know they were directors.

He said the regulator and the HSE needed the same powers as the Office of Corporate Enforcement so that if they took action, they could not be sued.