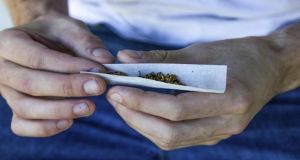 Community Awareness of Drugs (CAD) said decriminalisation would lead to a ‘litany of problems’. Photograph: Thinkstock

Measures such as expunging minor convictions for cannabis use should be considered before decriminalisation of the drug, a community drug-education group has suggested.

Responding to the decriminalisation proposals by Minister of State for the National Drugs Strategy Aodhán Ó Ríordáin, the Community Awareness of Drugs (CAD) group expressed concern that if laws were relaxed the perception of harm would diminish and use escalate.

Mr Ó Ríordáin has said there was “wide consensus” at a meeting last week on the national drug misuse problem that drugs across the board should be decriminalised.

Representatives of local and regional drug and alcohol taskforces, service users, representatives of the community and voluntary sectors and the Health Service Executive attended the event at the Mansion House in Dublin.

CAD said a 2009 study in Portugal by Cordosa, Santos and Duarte, based on 2008 data, had found the reported lifetime use of all illicit drugs increased from 7.8 per cent to 12 per cent after decriminalisation.

The Dublin-based group, which gets funding from the HSE and a local drug task force, said if use went up in Ireland then problem use would be more likely. It would lead to more physical and mental ill-health among drug users, and more psychosis.

Drug use would also have the effect of impairing learning in schools, training workshops and workplaces, and would lead to more road crashes.

Bernie McDonnell, director of services with CAD, said there was a “a litany of problems associated with cannabis use”.

“I can understand in one way that the main reason for decriminalisation is so people won’t carry charges throughout their lives. We just think there might be another way of doing this – maybe just leaving things in place as they are but expunging charges after a period of time.”

She said psychosis was a serious concern because “the cannabis is so much stronger now that it was before”.

“Not everybody who uses cannabis will go on to using other drugs, but if you talk to people with a history of it, they would say that alcohol and cannabis were very much gateway drugs. I know Mr Ó Ríordáin is very clear that this is not legalisation he is suggesting, but it is decriminalisation of all drugs.”