Children’s ombudsman indicates that in region of 138,000 children living in poverty 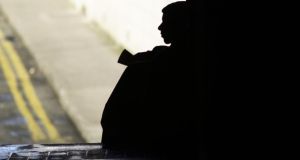 A boy begging in an alleyway off Dawson Street in Dublin. The State must address delays in the provision of social housing and ensure emergency housing “is appropriate to children’s needs”, says the Ombudsman for Children’s report. Photograph: Frank Miller

The Government is tolerating “unacceptable” levels of child poverty, standing over discrimination in schools and failing to protect children from violence, homelessness and bullying, according to a report by the Ombudsman for Children’s Office (OCO).

The report, to be published today, has been compiled for the United Nations Committee on the Rights of the Child as it prepares to examine Ireland early next year on its record on children’s rights.

This is “unacceptably high and represents an acceptance of a higher rate of consistent poverty among children than the general population”.

The Government must revise its target on reducing child poverty to take account of the larger number of children living in consistent poverty since 2011, it urges. It says schools have too much independence from statutory oversight, preventing the State from adequately ensuring children’s rights in them.

“The State must recalibrate the balance between schools’ autonomy and oversight by central Government . . .to ensure . . . the State assumes . . . responsibility for advancing and protecting children’s rights within the education system.”

It describes as “manifestly unsatisfactory” that children with a religion get preferential access to publicly funded schools of their religion, raising “serious concerns regarding Ireland’s compliance with its non-discrimination obligations under the Convention”. It calls for the removal from the Equal Status Act of the exemption for schools.

On child homelessness, it says hotel and B&B accommodation is not appropriate for children, as it “impacts negatively on family life and children’s development”.

On children in the asylum system, it says the OCO has received complaints about “child protection . . . access to education for children and appropriate clothing and diet for minority faith children”.

The OCO also raises concern about the dearth of after-care services for young people leaving State care who are at increased risk of homelessness. “The needs of this vulnerable group of young people have been consistently highlighted by the OCO both in the context of its investigatory work and through its direct engagement with young people who have experienced homelessness.”

The ombudsman recently investigated reports of children at risk waiting to be assigned social workers. “At national level there is still a substantial number of child protection referrals” where social workers are not being assigned in a timely manner.

The report also calls for adequate resources for the Child and Family Agency, Tusla.

Among other issues raised are the continued placement of children with mental health difficulties in adult psychiatric wards, issues around the care system and geographical disparities in accessing health services.

Rose, a mother of two, contacted the Ombudsman for Children’s Office (OCO) in May 2014 about social housing and how her family’s homelessness had been addressed.

She and her children had been placed in unsuitable emergency accommodation.

Keith, her youngest child, told the OCO what it was like:

“It’s freezing. That’s why I have this furry blanket. I share it with my mam and sister. I don’t like when people bully me.

“We have no upstairs. I’ve no space to play except in my room but that’s full of clothes. I’m sad ‘cos can’t have a dog here.

“When I think of the house I’d like . . . OK, in the sitting room there’s a doggie drinking water.

“The telly’s on. Upstairs there’s a black and white stripy rug in my room. I’ve two beds so my friend can sleep over. I’ve pictures on the walls. I can’t have any in this house.

“If we had that house we wouldn’t have to move all the time. Mammy’s cried over that.”

Rita contacted the OCO when her daughter Cait (15) was admitted to a hospital emergency department following a second suicide attempt and then transferred to an adult psychiatric ward, pending the availability of a bed in an adolescent unit. She had been there two weeks when Rita complained, saying it was inappropriate and was placing her daughter at further risk.

Cait spoke to the OCO about her experience:

“It was not a good experience. I was in a room by myself. I was being watched 24/7. I wasn’t allowed in the main ward. I couldn’t shower or go to the toilet by myself. Couldn’t go to the shop – even with my mam . . . I was very vulnerable.

“I know myself better than anyone knows me. It wasn’t a good place for a young person like me. I was alone. I think it wasn’t just the wrong place for me. It was a damaging place for me. I feel I was let down. I needed help and it wasn’t there. But some of the nurses were amazing. We had great chats. That’s what saved me.

“I knew I could get better. My mam was fantastic supporting me but I knew I had to fight all the way for myself too. . . I had a terrible experience and other teenagers shouldn’t have to go through it.”