Cheap clothes can come at a high price

Column: Trade unions are the single biggest factor missing in the sweatshops of Asia 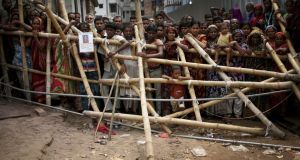 Curious onlookers and relatives of missing victims watch from behind a makeshift fence as workers start dislodging parts of the garment factory building which collapsed in Savar, near Dhaka, Bangladesh. Photograph: Wong Maye-E/AP

The leopard-print bikini is €5 in Penneys. The tropical-print crop top is €6. The print dungarees are €13. The print shorts are €5. Over in summer menswear, there are print swimshorts for €5; blazers for €25; Hawaiian shirts for €8. You can even get a pretty natty safari suit for €50. Cheerful? Sure – especially for us rain-washed, windblown Irish these clothes provide an instant fantasy of life at a sun-drenched beach party.

And cheap? No – there’s no such thing as cheap. If something is cheaper than your gut tells you it should be, it means that someone else is paying a very high price. The one big cost that can be squeezed is people. Human misery is stitched in to every fun, disposable garment we buy.

The great convenience of globalisation is that it makes those vague, ghostly somebodies invisible. It gets them out of our sight and off our minds.


Branded shrouds
Every now and then, alas, the somebodies pop up at the beach party, howling with grief and waving shrouds. And the shrouds have labels. It is reported that among those found in the rubble of the collapsed Rana Plaza building, along with the bodies of more than 350 garment workers, on the outskirts of Dhaka in Bangladesh, were Cedarwood State and Denim Co – both owned by Penneys. This is the expensive part of cheap.

I do not wish to be naively emotional here. I remember talking to a young woman in a village in Bangladesh. She lived on a mud bank thrown up by a flooding river – a “home” that would sooner or later be swallowed up again. She had been married off at 14 and, now barely out of her teens, already had a clatter of kids. As we spoke she was pressing animal dung with her hands to make fuel for the fire over which she cooked the meagre food on which her family subsisted. I reckon, given the choice, she would have taken her chances in a sweatshop in Dhaka, even for €30 a month for a 60-hour week, even knowing that she would have to risk deadly fires and collapsing buildings. For billions of women and men in Bangladesh and across Asia, the one thing worse than being ruthlessly exploited by a cynical capitalist system is being left outside that cynical capitalist system.

Until somebody comes up with a better route out of the absolute poverty of subsistence agriculture, urbanisation and industrialisation are utter necessities for progress towards human decency. The countryside can support its vast and burgeoning populations only at an abysmal level.

If you think corrupt capitalists make savage masters (and they do), try living under Mother Nature and the plagues, droughts and terrifying uncertainty she inflicts on those who have no buffers against her cruel vagaries. Rural poverty won’t end until much of the rural population has moved to cities, leaving more resources for those who stay.

And let’s face it: those who leave are not going to be employed as software engineers and cardiologists. Cheap labour is what they’ve got.

But this big picture view can also be misleading. It suggests that, in this epic process, extreme exploitation is inevitable. It comes with the package of the Industrial Revolution in its raw, unadorned state. Didn’t exactly the same thing happen in 19th-century Britain, when men and women from the countryside went to work in the “dark Satanic mills”? Isn’t the old refrain “From Hull and Halifax and hell, good lord deliver me” now simply being uttered in Bengali and Chinese and Indonesian and Vietnamese, with the first two placenames changed but hell remaining constant?

Indeed. But the cruelty of industrial revolutions in the western world was mitigated by a mighty force – the workers themselves.

The single but crucial difference between the 19th-century toiler in a Lancashire cotton mill and the woman sent back in to work in a crumbling sweatshop in Dhaka is trade unions.


Union protection
Organised labour civilised the industrial revolution. It forced states to set safety standards and police them, it ended child labour and set limits to working hours. It forced employers to share some of their profits and pay a living wage. And these hard-won changes didn’t destroy the Industrial Revolution – on the contrary, they made it more innovative by forcing factories to rely on something more than the mere cheapness of their goods.

This is the single biggest factor missing in the sweatshops of Asia. More codes of conduct signed off by western retailers won’t change anything. General boycotts of stores like Penneys won’t help either: throwing poor people in Dhaka out of work is no solution. But refusing to buy from suppliers that don’t allow unions to operate freely would have a transformative effect. Let workers fight for themselves and we’ll end up with clothes that are more expensive but less grotesquely costly.