Case study: ‘I actually get scared on the bus, so I always sit at the front’

Nokuthula Malete and her sons moved home, but it felt like moving to another country 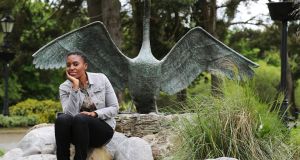 Nokuthula Malete: “My kids were born here, why should they be treated differently?”

Nokuthula Malete always sits near the front of the bus. Using public transport in Ireland makes her acutely aware of her skin colour. Eyes follow her as she chooses a seat for the journey. At the back of the bus, she is far more likely to experience racist comments and abuse.

“I feel vulnerable and aware of the fact that I’m a black woman. I actually get scared on the bus so I always sit at the front. I’m conscious that I’ve experienced racism before and know what it’s like.”

Malete did not always feel uncomfortable using public transport. When she moved to Ireland from South Africa in 1999 she discovered a welcoming and friendly community in her new home in Newbridge, Co Kildare. This all changed when she moved to a different housing estate in 2008.

“It felt like I’d moved to a different country. The people in the estate were the complete opposite to what I was used to, it was a complete shock.”

Malete tried to settle into her new home with her three young sons, but became increasingly nervous about allowing her children to play outdoors in the estate.

“It started with them calling us names. They’d call us monkeys and say we should go back to the zoo. They said we looked like poo and called us the ‘n’ word. They’d say, ‘you n*****s, go back to your country’.”

While young teens were responsible for the racist rhetoric, Malete says it was a group of adults who vandalised her car and home.

“They broke the aerial of my car, they punctured my tyres, they put ketchup on my window screens. It was tormenting me to the point where I had a nervous breakdown and had a car accident because of lack of sleep. I had to leave my job because of the panic attacks.”

Although she reported the abuse to the gardaí on numerous occasions, the authorities said they were unable to take action against teenagers and children. With the case of vandalism she says it was her word against that of the estate’s local community.

In 2011, after months of sleepless nights and health problems, Malete moved out of the estate with her sons.

“I was so irritable, I was shouting at my kids about any little thing. It was as if my life was taken away from me. I was no longer sociable. I’ve tried to move on with my life but it’s not the same.”

Malete hates that she must warn her three sons to take extra care when hanging out with friends around the local area. “I say because they are black they should be extra careful every time they go outside. They are more likely to be accused of doing things wrong than their friends.

“My kids were born here, why should they be treated differently? They should be free to live their life and have fun. They are different because society chooses to treat them differently. It breaks my heart. No child should have to live like that and be made to feel they have to work twice as hard.”