Carrickmines funeral: ‘All my family was gone, in one go’

A happy day spent together, with the children playing in the garden, before tragedy 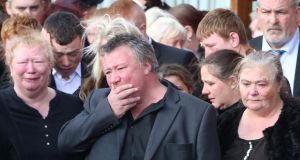 At the funeral of Thomas, Sylvia, Christopher, Jim and Mary Connors in The Church of the Ascension of the Lord, Balally, Sandyford. Photograph: Colin Keegan/Collins Dublin. 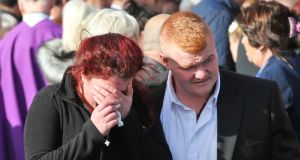 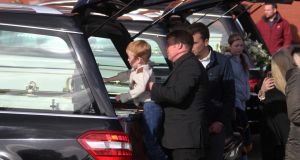 The Lynch and Connors children had played together in their uncle’s garden last Friday week – the afternoon before the fire that would take their lives and those of their parents.

John Lynch, uncle to his sister Sylvia’s children Jimmy (5), Christy (2) and Mary (5 months), and to his brother Willy’s daughters, Jodie (9) and Kelsey (4), spoke towards the end of the requiem Mass for three of the children yesterday.

Five caskets lay before the altar at the Church of the Ascension in Balally, Dublin, where the Connors had worshipped, for their funeral Mass.

Two oak caskets containing the remains of Sylvia Connors (27) and her husband Thomas (27) were to the fore, while the smaller white caskets of Jimmy, Christy and Mary, lay closer to the altar.

John, who had also spoken at the funeral Mass of his brother Willy’s young family in Bray on Tuesday, first expressed his family’s gratitude.

“I’d just like to say ‘thanks’ to everyone, for the support from the community...to help us through this tragedy we’re going through.”

His voice faltering then, he described having had a “lovely day” with his brother Willy (25) and his partner Tara (27), his sister Sylvia, his brother-in-law Thomas, his brother Jimmy (39) and his three nieces and two nephews, at his home in Bray the afternoon before they died.

“We had a lovely day. The kids were playing in my garden,” he said.

Towards the evening, Thomas had suggested they all come back to his and Sylvia’s home.

“Thomas said to me, ‘I’ll go home and drop off the children and then I’ll come back and pick up Willy and Tara and the children and Jimmy to come to my place’. We went up, and we had a lovely day, and later I said goodnight to them.

“I had an oul can, Thomas had a cup of tae. When I left that night and woke up the next morning and heard the next morning, I did not believe it, I thought it was a hoax call.

“Then, in a moment, I realised all my family was gone. My brothers, my sister, my sister-in-law, my brother-in-law, my nephews and nieces. The whole lot gone, in one go.

“I’d just like to thank the people around us, for your support.”

The congregation, which filled the church, with many people standing to the sides and at the back, and sitting in the gallery above, applauded as he left the altar. He hugged other family members at the front of the church, holding them, before sitting some rows back, leaning forward with his head in his hands, sobbing.

Fr Derek Farrell, parish priest of the Travelling People and chief celebrant, said Sylvia had been, in the words of her mother-in-law JoJo, “the best girl you could ask for”. Thomas “loved his family, his family was his life”.

Jimmy, a lovely happy boy, loved to stay with his grandparents, while Christy was “full of life, by times quiet” and both were “very clever”. Baby Mary was “treasured by the whole family”.

Their surviving children, Tom (4), who was pulled from the fire by his uncle, John (15), and Michael (6), who had been staying with his grandparents elsewhere on the site that night, had started school at Ballyogan Gaelscoil with Jimmy.

“As a family, the parents of Thomas put it very simply,” said Fr Farrell. “ ‘They were a lovely family, lovely children. We loved them’.”

Ulieann piper Eamon Walshe played Raglan Road as the caskets were removed from the church – first Thomas’s, followed by that of his wife. The parents’ caskets delayed a while at the door as those of their children were brought from the altar to join them – first Jimmy’s, then Christy’s and finally the smallest, of Mary.

Family members wept as they leant forth to lay their hands briefly on the white caskets.

In separate hearses they left the grounds, with the parents’ leaving first. Floral arrangements in each included the tributes: ‘Mammy and Daddy’, ‘Nephew’ and ‘Baby Mary’.

Before beginning their journey to Wexford, the Connors family homeplace, for burial today, the hearses passed Gaelscoil Ballyogan before stopping briefly at the temporary halting site on Glenamuck Road, where they had lived for seven years, and died.