Budget 2017: No agreement on date for social welfare increases 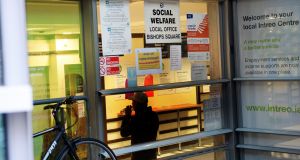 The precise date for the introduction of increased welfare payments has still not been agreed. File photograph: Eric Luke/The Irish Times

Fianna Fáil and the Government have still not agreed the precise date for the introduction of increased welfare payments.

A dispute between the two sides took place over the weekend about when the €5 weekly increase would take effect and a compromise date of next March was agreed.

However, the actual date of their introduction has not been decided, with Fianna Fáil insisting they must be implemented by March 3rd.

A spokesman for Minister for Social Protection Leo Varadkar confirmed no date had been agreed but said it would be decided within the next two weeks.

Fianna Fáil’s expenditure spokesman Dara Calleary denied the party had focused solely on securing a €5 increase in the pension in their budget negotiations.

The Independent Alliance, which has five TDs, denied it had secured a series of local deals as part of its budget negotiations.

Minister of State at the Department of Health Finian McGrath said funding had been secured for an A&E unit for Beaumont Hospital but insisted this was 10 years in the making.

Independent Alliance TD Kevin “Boxer” Moran announced funding for a local school in Athlone but said it was part of an overall investment programme in education.

The Independent Alliance said it had a key influence on this budget and insisted this was a demonstration of how well the minority Government had worked.