Opinion: ‘It will be 2051 before the last person on the current housing waiting list is offered accommodation’ 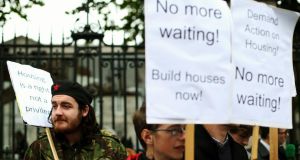 ‘An increase in €10 million has been allocated directly to provide accommodation and services to homeless people. Again, an increase in funding is always welcome and comes as a surprise, but given the scale of the problem, with over five new people becoming homeless every day in the Dublin area alone, it will not be sufficient to give everyone a bed for the night.’ Above, demonstrators outside Leinster House, as Minister for Finance Michael Noonan delivered Budget 2015. Photograph: Brian Lawless/PA 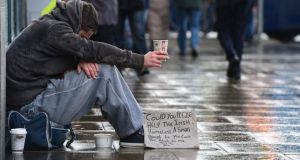 ‘All in all, 10,000 new social housing units could be available by 2018, which is very welcome. Each new unit is another family either taken permanently out of homelessness or out of their existing substandard or overcrowded accommodation. However, this has to be seen in the context of over 90,000 households – and growing rapidly – on the social housing waiting list.’ Photograph: Alan Betson

The biggest social problem that Ireland – and Dublin in particular – faces today is the housing shortage and the visible tip of that problem, namely homelessness. With an election coming shortly, it is the Coalition’s potential Achilles’ heel. The Government has belatedly recognised the need for a substantial investment in social housing.

The investment of €1.5 billion from Exchequer funds for social housing, over 2015 to 2017, is substantially more than I had hoped for. This is expected to deliver 2,500 social housing units next year and 6,700 units by 2017. Whether that time frame is realistic or not, I wait to be convinced. But it will make a significant difference.

A further €300 million will be provided by way of public private partnerships. I am not a fan of these arrangements for the purpose of providing fundamental social needs, such as housing. We saw, towards the end of the Celtic Tiger, the collapse of a number of public private partnerships that were intended to regenerate rundown social housing estates, leaving residents in an even worse position.

Public private partnerships are inherently insecure, as the private partner will withdraw if circumstances reduce the profitability of the project. They are fine for building motorways, which can be left unfinished should the partnership collapse, to be restarted when circumstances change. But for basic fundamental needs such as housing, they are too uncertain.

And our economy is still in a perilous state, highly dependent on what happens in the global economy. However, anything that might increase the social housing stock is welcome. This measure is intended to provide 1,500 new social housing units.

A further €400 million will be provided to approved housing bodies via an off-balance sheet finance vehicle. This too is very welcome and the voluntary housing charities are more than willing to play their part in the provision of social housing, provided funding is available. This could provide a further 2,000 social housing units by 2018.

An increase of €10 million has been allocated directly to provide accommodation and services to homeless people. Again, an increase in funding is always welcome and comes as a surprise, but given the scale of the problem, with more than five new people becoming homeless every day in the Dublin area alone, it will not be sufficient to give everyone a bed for the night.

However, the budget fails to address the major cause of homelessness today, namely the increase in rents in the private rental market, particularly in Dublin. While rents have been increasing substantially over the past 18 months, the State’s rent allowance has remained static. Individual tenants and families, unable to meet the increased rent, are being evicted.

Organisations working with homeless people have been unanimous in calling for an increase in the hopelessly inadequate rent allowance, and for rent control legislation to prevent landlords arbitrarily increasing the rents far in excess of inflation.

Furthermore, with 35,000 residential homes in mortgage arrears of more than two years, and 40,000 buy-to-lets in serious trouble, house repossessions are going to gather momentum over the next 12 months as the negotiations between the lenders and mortgage holders run their course. Each house repossession is potentially another household forced into homelessness.

Budget 2015 is an important first step in acknowledging the crisis in social housing and homelessness. But even if the measures proposed come to pass, and even if they continue in future budgets, and if nobody else becomes homeless or joins the social housing waiting list, the scale of the problem is such it will be 2051 before the last person on the current housing waiting list is offered accommodation.

Peter McVerry is a Jesuit priest working with homeless people