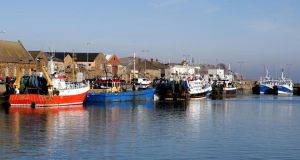 The body of a Latvian fisherman has been recovered from Howth Harbour. File photograph: David Sleator/The Irish Times

The body of a fisherman has been recovered from Howth harbour in north Co Dublin.

It is believed the man - who was a Latvian national aged in his mid-30s - had fallen between two trawlers at some stage during the night.

He was discovered by a local fisherman and emergency services were alerted immediately.

The deceased, who was a popular and well known member of the Howth fishing community, had been in Ireland since the early 2000s.

The Coastguard was contacted by the Dublin Fire Brigade for assistance at about 10.15am this morning.

A Coastguard unit and a helicopter were dispatched, but they were stood down minutes later after the body was secured by the crew of the Howth inshore lifeboat.

The man’s remains were removed to the Connolly Hospital, Blanchardstown, Co Dublin.