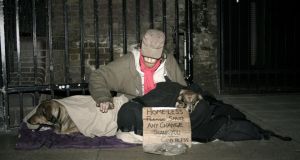 “The problem is most acute in Dublin; official figures show that six new people are becoming homeless in the Dublin region every day, while only two people each day succeed in escaping from homelessness.” Photograph: Getty Images

A young man, aged 19, left his family home recently due to his father’s violence. He had completed his Leaving Cert, doesn’t take drugs, drink or smoke and has never been homeless before.

He tried to get accommodation from the homeless services but was told that all beds were full and was offered a sleeping bag. He slept rough in a railway station for a few nights. We have since paid for him to stay in a B&B until we can find him suitable accommodation within our own resources.

A mother with three children were living in a private rented flat, paying €900 per month. The landlord increased the rent to €1,300 per month, she was unable to afford it and was evicted. The family are now living in a hotel room, with no access to cooking facilities and no idea how long they will be there.

The problem of homelessness is out of control; it is getting worse every week and no one appears to be doing anything about it. The problem is most acute in Dublin where official figures show that six additional people are becoming homeless in the region every day, while only two each day succeed in escaping homelessness. More and more people who seek a bed for the night are told those beds are full. Just to keep pace with the problem would require opening a new hostel every week with 28 beds.

Among the normal exits out of homelessness are into social housing and private rented accommodation. It is now almost impossible for homeless people to access private rented accommodation. In November 2009, there were 6,700 units of accommodation available for rent in Dublin; in November 2013, there were only 1,500. And 2,500 people were chasing those 1,500 units. Landlords can name their price. Rents in Dublin have risen by 18 per cent since 2011 and the rent allowance payable by the Department of Social Protection has fallen by 28 per cent since 2011.


Growing frustration
For single people, who are dependent on

this allowance, finding affordable rented accommodation is like looking for a needle in a haystack. And since the demand for such accommodation far exceeds supply, landlords can choose their tenants. Understandably, they prefer people who are working and paying cash. Only about 1 per cent of landlords are accepting people on rent allowance. The frustration of homeless people is enormous and growing.

The other exit out of homelessness is into social housing. Again, there is very little of this available to homeless people. There has been a 90 per cent drop in social housing output between 2007 and 2011, resulting in a 100 per cent increase in the social housing waiting list, from 43,700 in 2005 to 89,900 in 2013. The Government has allocated funding to build 449 new homes over the next two years – which will reduce the waiting list by 2 per cent!

The third exit out of homelessness is into housing provided by the voluntary sector. However, its limited resources mean it can only provide a small fraction, perhaps 1-2 per cent, of the homes that are needed.

In February 2013, the Government produced a policy statement, in which it announced its objective to eliminate long-term homelessness by 2016. This statement was a waste of paper. It is high on aspirations, devoid of actions.

“Increasing the supply of rental stock as well as increasing new social housing through innovative means is a vital part of ensuring that Government meets its commitments,” it states. But given the dire shortage of social housing and rental accommodation, it is difficult not to be cynical.

The traditional image of homeless people is that of people addicted to drink or drugs or with serious mental health problems. This image gives policymakers an excuse to marginalise homeless people. But most homeless people’s only problem is that they do not have the money to pay for their own accommodation. They are the invisible homeless.

Most people becoming homeless these days are people who can no longer afford to pay the rent in their current accommodation, or whose relationship with parents or partner has deteriorated to the point where they are forced to leave their home. But if left in homeless services, their self-esteem plummets, demoralisation sets in and they may well develop an addiction or mental health problem such as depression.

When a person becomes homeless, their first experience with homeless services is critical for their future. However, that first experience will usually involve being placed in a homeless shelter, sharing a room with active drug users and people with long criminal careers.

There they will be offered drugs, risk being assaulted and may wake up in the morning to find their room-mates gone, along with their money, mobile phone and any other valuables they possessed.


Affront to human dignity
For many newly homeless people, it is a terrifying experience. They may not return to homeless services, preferring instead to sleep rough.

However, far too many services are an insult and affront to the dignity of homeless people, providing accommodation that is unsafe and unethical. If adult homeless services were subject to inspection by the Health Information and Quality Authority – which they should be – many would be closed immediately.

“Beggars can’t be choosers”, one homeless person was told when he complained. That sums up the attitude of many in authority to the problem of homelessness.

Coronavirus: HSE could be short on staff when surge comes, head of emergency medicine says

1 Ireland has strategy to ‘break the chains’ of coronavirus - WHO’s Mike Ryan
2 Coronavirus: HSE could be short on staff when surge comes, head of emergency medicine says
3 Coronavirus: Warning over rate of growth as 13 more die in Republic
4 Coronavirus: Residents of Wuhan told to stay inside and be vigilant
5 Impact of Covid-19 on Travelling people: ‘Worst that ever came’
Real news has value SUBSCRIBE