Asylum claims in Ireland up while deportations fall

Claims by Pakistani nationals increase the most, followed by Bangladeshis 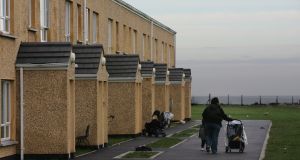 The centre for asylum seekers in Mosney, Co Meath. Applications are up as deportations fall. Photograph: Frank Miller/The Irish Times

The number of asylum claims is set to almost treble by the end of the year, with applications from Pakistani and Bangladesh nationals accounting for most of the increase.

Claims by Pakistani nationals have increased eightfold so far this year, while claims from Bangladeshis are up almost fourfold.

People from the two nations now account for 54 per cent of all asylum claims being made in the Republic, compared with just 19 per cent of claims last year.

According to the Department of Justice, applications from those nations are increasing much faster than from other countries because the Irish system is being used by young men on student visas in the UK to prolong their stays in Europe.

A department review found that most of those from Pakistan and Bangladesh claiming asylum here had travelled from England to Scotland and then taken a car ferry to Northern Ireland. They then travel to the Republic and lodge their asylum claims.

The Irish Refugee Council said that while some of those claiming asylum from both countries were probably “chancing their arm”, others were genuine.

Chief executive Sue Conlon said the council’s research found that many of the men were coming to Ireland after misinformation had spread within their own communities in the UK.

“They seem to think by living in two EU states, rather than one, this increases their chances [of securing asylum], and of course that has no impact at all,” she said.

Meanwhile, the Government has insisted the State agencies responsible for deportations are working to ensure as many as possible are carried out despite ongoing complications around detaining failed asylum seekers ahead of being deported.

A High Court judgement, known as the “Omar judgement”, two years ago found that gardaí did not have the right to enter private dwellings to arrest those for whom deportation orders had been signed.

It has emerged that both the number of deportations being effected and the number being signed by the Minister for Justice have fallen significantly.

This is despite the number of claims for asylum increasing over the past two years following sharp declines for more than a decade.

In 2012, for example, some 302 deportation were effected. In 2013, when the Omar judgement was handed down, that number had fallen to 209. And last year, the first full year that gardaí could not enter private dwellings to detain people for deportation, forced removals from the State plummeted by 45 per cent to 114 cases.

The number of deportation orders being signed last year also fell, by 57 per cent to 739.

However, while deportations and deportation orders declined sharply in 2014, the number of asylum claims increased by 53 per cent to 1,448 cases.