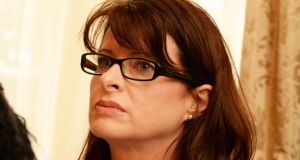 Human Rights and Equality Commissioner Emily Logan at the launch of the European Network Against Racism Ireland’s new report on racially-motivated incidents in 2014. The body found that there were almost 400 racist incidents recorded in Ireland last year. Photograph: Cyril Byrne/The Irish Times

Almost 400 racist incidents were recorded in Ireland last year, including 16 racially-motivated assaults, according to a new report.

Figures compiled by the European Network Against Racism Ireland (Enar Ireland) for 2014 show that there were 399 cases of racially-motivated intimidation or attacks reported to the organisation last year.

These incidents ranged from public harassment and online abuse to spitting and arson attacks.

One complaint dealt with a woman who was six-months pregnant who was kicked in the stomach by her neighbour following sustained bouts of racist abuse.

Another case dealt with a 10-year-old Muslim girl who was shoved and hit by a number of young people in a playground.

According to statistics from the second half of last year, 182 racist incidents were reported.

People from a “Black African” background were the most discriminated against, with 43 of the 182 incidents involving members of that particular ethnic group.

Those with Muslim, Asian and Jewish backgrounds also featured highly in a breakdown of victim profiles.

Some 57 incidents centred around media and social media activity. There were a number of complaints made against an anti-Roma Facebook group from Waterford, while Phoenix magazine and the Israeli embassy’s Facebook account also came in for criticism for their allegedly provocative coverage of last year’s blockade on Gaza.

Victims of abuse were most likely to be aged between 36 and 55.

Speaking at the launch of the report, Shane O’Curry, director of Enar Ireland, said the fact that 43 per cent of incidents were reported by witnesses who had seen or heard about abuse or assaults indicated that many victims are reluctant to complain about negative experiences.

“They’re afraid of reprisals, they may have had experiences before where the incident has been minimised or not believed. But mostly people believe that there’s no point and that nothing will come of it.”

The report also cited a “high level of confusion amongst victims” about support available from gardaí, who don’t do enough to classify racist cases appropriately, according to Mr O’Curry.

“There’s an ambiguity about it because, on the one hand, there is a facility to record racist incidents on the Pulse system. On the other hand, we know this isn’t happening. Central Statistics Office figures for racist incidents are extremely low.”

Also present was the newly-appointed Human Rights and Equality Commissioner Emily Logan, who said instances of racist abuse occurring in Government offices detailed in the report are “of particular concern”.

Asked whether Irish people should be wary of the rise of Islamophobia across Europe following a number of high-profile attacks carried out by Islamist militants, she said that there is no room for complacency.

“I think it would be foolish to ignore what’s happening in Europe and just to assume that because we’re a small island it’s not going to affect us. Just because it’s on a much smaller scale here doesn’t mean it isn’t happening.”

Enar Ireland’s iReport method is a confidential online reporting process which encourages both victims of racist incidents and onlookers to come forward with their experiences.