African activists meet in Wicklow to discuss end to FGM 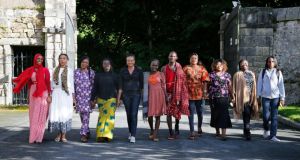 Ifrah Ahmed was 17-years-old when she left Somalia and travelled to Ireland on her own. She was shy, spoke no English and knew virtually nothing about the country that would become her adoptive home.

Nine years on, the energetic 26-year-old, brimming with self-confidence and poise, has become a globally prominent advocate for a cause that has driven her for almost a decade.

As a survivor of female genital mutilation, Ahmed has been a vocal campaigner against the practice since she was a teenager.

In the past two years, her mission has taken her back to Somalia, where earlier this year she was appointed adviser on gender issues to prime minister Omar Abdirashid Ali Sharmarke.

“I took the position basically to bring the female genital mutilation (FGM) campaign to a point where the Somali government can say, ‘We have to end this’,” she says.

She was the driving force behind a high-level FGM conference in the capital, Mogadishu, in July – the first such gathering in a country where about 98 per cent of girls and women between the ages of 15 and 49 have undergone genital cutting.

It took place despite a suicide bombing at the original venue on the eve of the event.

With campaigning underway for elections due next month, Ahmed has been putting up “Stop FGM” posters on the streets of Mogadishu.

An estimated 200 million girls and women have been subjected to FGM in more than two dozen African countries, as well as in parts of Asia and the Middle East. Unicef believes three million girls undergo it every year.

The severest variety, called infibulation, involves cutting away her external genitalia and the sewing up of her vagina.

Prevalence varies between regions and countries, but in seven African countries it is almost universal (more than 85 per cent) and in four more the rate is more than 60 per cent.

At the Glencree Centre for Peace and Reconciliation in Co Wicklow this week, Ahmed joined other anti-FGM activists from across Africa to share information and work on strategy.

They were brought together as part of the Guardian’s global media campaign, supported by the Human Dignity Foundation, which helps and trains activists in harnessing media to further the anti-FGM effort.

“It’s about amplification really. It’s about activists getting involved in activities that attract the attention of the media,” says Maggie O’Kane, the Guardian’s multimedia investigations editor, who is involved in the campaign.

The effort has already had some notable successes. In the Gambia in 2015, a year after a campaign led by the emigré Jaha Dukureh got underway, a legal ban was formally adopted.

It was the latest in a string of legislative advances by anti-FGM activists in recent years.

Yet while the practice has been outlawed by a number of African and European states, enforcement of such laws is notoriously patchy. And in countries where genital cutting is deeply rooted and widespread, stamping it out is a slow process.

In Kenya, which already has a legal prohibition, activists have focused on raising awareness in rural areas, while in Sierra Leone, where a temporary ban that was adopted during the Ebola crisis remains in place, campaigners have been working to ensure it stays that way.

Its cultural meaning varies across Africa, among Christians and Muslims. It is considered variously as a female rite of passage, a spiritual requirement, a guarantor of chastity, a boost to fertility, a prerequisite to marriage and a cleansing ritual.

“I think all we needed in the Gambia, to be honest, was political will,” says Dukureh.

“We needed the government to take a position and say, we will not tolerate our daughters going through this practice.”

Like her fellow activists, Ahmed is under no illusions about the scale of the task she faces.

In discussions with religious leaders in Somalia, she finds herself having to fend off assumptions about “the Irish girl” who was “brainwashed” in her time overseas.

“The challenge is, how do we get the imams to speak about FGM and say, ‘This has nothing to do with religion’? ” she says.

“They see me as a western woman instead of seeing me as a young Somali, and it’s very hard to convince them that this is our issue.”

“But I’m a woman who never gives up.”