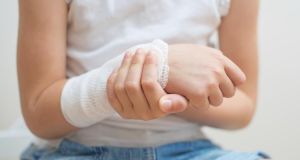 Research published late last year from Queen’s University Belfast said more than 500 children were shot or beaten by loyalist and republican paramilitaries over the past two decades.

The Human Rights Commission has called on the UK government to take immediate action to stop paramilitary assaults on children in Northern Ireland.

Twelve youngsters were shot between 2009 and last year, while another 27 were assaulted, the organisation said.

It submitted a report to an influential UN committee investigating children’s rights.

The report said: “The committee may wish to condemn the ongoing attacks carried out by paramilitary organisations and ask the state party to take immediate and effective action to address the issue of paramilitary style attacks on children in Northern Ireland through measures relating to both transitional justice and child protection.”

Figures for the number of attacks may be under-reported since fear of paramilitary violence and self-reported experiences of attacks on children are much higher, the Commission said.

It has contacted the UN Committee on the Rights of the Child.

Research published late last year from Queen’s University Belfast said more than 500 children were shot or beaten by loyalist and republican paramilitaries over the past two decades.

The Commission highlighted 2008 UN recommendations that have not yet been implemented and required urgent action.

These include raising the age of criminal responsibility, ending corporal punishment and reducing the use of remand for children in the criminal justice system.

The Commission advises the UN Committee should ask the UK Government, including the Northern Ireland Executive, to:

- Take immediate action to increase the minimum age of criminal responsibility from 10 to at least 12 years of age.

- Ban smacking of children without delay.

- End academic selection; the UN committee called for testing to be abolished in 2008 and despite the end of the 11+, the current system of testing has allowed a “two-tier culture” to remain, according to the Commission.