Gardaí want mother of child, called Maria, to come forward due to concern over her health

Supt Brendan Connolly held a press conference making a plea to the mother of the infant found at around 3.30pm on Friday May the 8th. 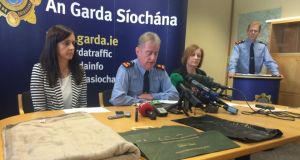 (From left) Sgt Maeve O’Sullivan, Supt Brendan Connolly and Rita Byrne from Tulsa at a Garda press conference held on Monday in a bid to identify an infant found at around 3.30pm on Friday on Steelstown road near the Kildare-Dublin border, close to Rathcoole and the N7. 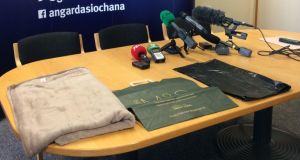 Items similar to those found with an abandoned infant discovered on Friday near the Kildare-Dublin border, close to Rathcoole and the busy N7. 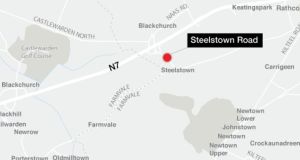 A map showing where in Rathcoole the baby girl was found. 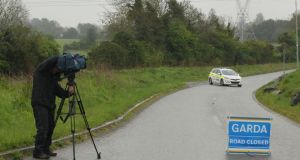 Garda preserve the scene on Steelstown Road in Rathcoole, Co Dublin after a baby girl was discovered by a member of the public on Friday. Photograph: Stephen Collins/Collins Photos.

Gardaí have urged the mother of a new-born baby found abandoned on a Dublin road last week to come forward, saying she may require urgent medical attention.

At a press conference in Clondalkin Garda station on Monday, investigating officers displayed replicas of items found with the baby - a Caucasian girl now being called Maria - in Rathcoole on Friday afternoon including a black bin-liner, a green paper Marks & Spencer bag, a small baby-blue cloth and a pale brown fleece blanket.

According to Supt Brendan Connolly, the blanket, or throw, in which the baby was wrapped could prove to be an important piece of evidence. It has a white ‘Primark Home’ label.

The actual items found at the scene on Steelstown Lane at 3.30pm on Friday last were not displayed as they are currently undergoing forensic examination.

“Somebody out there must recognise these items, and we are appealing to anyone who can assist us to contact us here in Clondalkin Garda station,” said Supt Connolly, flanked by Sgt Maeve O’Sullivan.

“They are common, everyday items found in every home, we are just hoping that somebody seeing the items - particularly the throw - may recognise them and may be in a position to assist us to find mum and to reunite her, if she so wishes, with her baby.

“Our main focus and concern is for the safety of this mum,” he added.

Also present was Tusla Child and Family Agency principal social worker Rita Byrne, who said her organisation would be seeking legal advice on how to proceed with the baby, who remains in a stable condition in hospital.

“We’re desperately anxious that she [the mother] makes contact with us as soon as possible... Our one concern is for mammy, and we would like mammy to come forward and make contact with us so that we can look at supports that we can offer her into the future.

“We’re very, very concerned for her welfare, she may need medical treatment. We want to reunite her with her child,” she said. “Obviously we will be seeking legal advice in relation to baby Maria.”

Gardaí said a large volume of traffic usually passes through the area but the stretch of road where the baby was found was particularly quiet last Friday.

The infant was only discovered after a young couple passing by in a car stopped for a toilet break.

Based on medical opinion, it is thought that the child may have been born 24 to 36 hours prior to her discovery.

Investigating officers do not know whether she was born inside or outside of hospital, but do not believe that she had been abandoned for an extended period of time.

Given the poor weather last Friday, Supt Connolly said the infant was very cold when the medical team first arrived but no injuries had been sustained as a result of being left on her own.

Westmeath nursing home says it is managing Covid-19 outbreak 12:59
One of country’s main labs unable to process Covid-19 tests over weekend due to staff shortages 12:56
Golf and tennis clubs closed under Level 5 as deemed ‘non-essential’ services 12:23
Number of schools forced to close after hand sanitiser is recalled 12:12
Relatives not given chance to be with dying Covid nursing home residents - report 12:05