A view from abroad: ‘Tenants are the new gays’

We finally gave a fundamental right to gays now how about the right to a home? 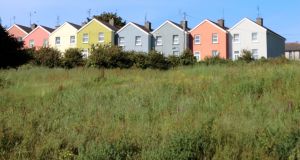 Few would argue that, in European terms, tenant rights in Ireland are what they could be

When Ireland voted for marriage equality on May 22nd, it voted out the gay community as – arguably – Ireland’s discriminated minority number one.

Of the many disadvantaged groups remaining in the country, one stands a good chance of inheriting the vacant top spot: Ireland’s tenants.

In post-May 22nd Ireland, tenants are the new gays. They are a discriminated-against minority about whom the homeowning majority occasionally feign concern but, behind their closed semi-D doors, actually don’t give a damn.

The tipping point came when a smart, targeted campaign called out people on their apathy and pointed out how marriage inequality discriminated against people’s siblings, cousins, neighbours as well as workmates.

Out of respect to those people, an Irish majority threw open the institution of marriage to a minority. A lightbulb went on: extending a fundamental right to a minority does not dilute it.

So when – and why – will Ireland decide to extend another fundamental right to all: the right to a secure home?

If you own your home, this fundamental right is a given. Unless you fall into mortgage arrears, you don’t have to worry about whether Christmas will be spent with your children in a bed-and-breakfast.

If you own your home, it is your castle; if you don’t, Ireland has decided a home is a house, an arbitrary pile of bricks whose occupants’ futures depend on the whims of their landlord.

So far, Irish home-owners are too busy owning their homes to worry about that. Yet those same people, though not homosexual, voted for marriage equality anyway. If that was possible, why not join a campaign for greater tenants’ rights? One in 10 people are gay, they say; one in five rent.

Perhaps your excuse for not backing tenants’ rights is that you’re a negative-equity accidental landlord who, unconsciously, feels resentful towards giving more rights to the people living in your home?

Or perhaps you aren’t a landlord at all: just one of the millions of Irish people who own their own home and who, deep down, perhaps believes that anyone who doesn’t own a home deserves what’s coming to them. What is your excuse for not backing some or all of the following tenant rights?

Would you back proper certification of properties, requiring landlords to apply for an NCT-style certificate before renting their property?

How about graduated rent models to set out small, regular rent rises over the coming years to which both sides sign up to in the lease?

Would you support a defined code of conduct, allowing tenants to withhold part of their rent if, for instance, promised repairs were not carried out?

Finally, how about a “rental atlas”, similar to the property price register, that forces landlords to declare their rents to the local authority and allows would-be tenants to get an idea of what they should expect to pay.

These are all standard practice in the German rental market. We don’t need to long-finger change with another study of what “Europe” does; we know what they do. We need to want the same. When Threshold, the tenants lobby group, presents its annual report next month it will repeat their message from the past years: that Ireland’s rental sector has outgrown its legislation and is not fit for purpose.

But will the majority in Ireland, like last year, watch the report on the news and go to bed, still convinced that renting is a temporary thing for people below 30?

It’s not: it’s how one in five people in Ireland – by choice or through circumstance – live.

It’s time to wake up and realise that owning a home in Ireland is like heterosexuality: it’s not normal, it’s just common.